The Bee of Danville, Virginia

In recent weeks, Newspapers.com has added over a hundred thousand pages of content to The Bee, published in Danville, Virginia. Editions of this newspaper now span a significant number of decades in the 20th century, from 1922 to 1977, and total over 200,000 pages 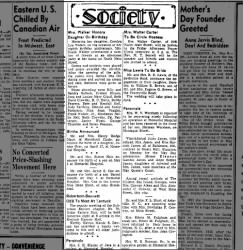 Danville, an independent city located along the Virginia-North Carolina border, south of Lynchburg, was settled in 1793 and incorporated in 1835. Locate it on the map on The Bee‘s information page at Newspapers.com where you can also review sample issues, see who else is interested in the paper, and enjoy reading clippings made by other Newspapers.com subscribers with family roots and other interests in the area.

Like many cities in America, Danville’s population relied on its industries. Cotton and tobacco were the local cash crops, therefore tobacco news garnered headlines in nearly every issue. Anyone with family in the area will find society news of interest with announcements of weddings, births, and personal tidbits. Like most cities, Danville celebrated its hometown heroes, like these three men who saw action in Leyte in World War II and returned home on leave in 1944. Look for photos of your ancestors in issues of your hometown papers, too. Anybody know these May Day beauties at Longwood College in 1953? Plus, every town boasts a few well-known citizens. One of Danville’s most famous is Wendell Scott, NASCAR’s first African American race car driver, an accomplishment that introduced him to Hollywood notables, and on whose life the movie Greased Lightning was based. 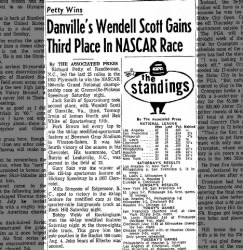 Headlines sell newspapers, so a front page typically displays plenty of intriguing headlines to capture a reader’s interest. Headlines below the fold on this 1938 front page caught our attention with provocative titles like “Dog Attacks City Assessor; Bites His Leg,” “Stolen Hen is Recovered Before Eggs Got Cold,” “Reopen Grave So Daughter May See Her Father,” and “Danville Woman Asks Gov. Price to Help Her Find a Husband.” In this last, a lonely 48-year-old Danville widow wants “to raise chickens and cuddle them up,” stating that earlier suitors “were not sober and had no regular job.”

Newspapers can be informative when we look for family history. In the pages of The Bee and other hometown papers on Newspapers.com, read about life events, catch a bit of trivia, discover a family photo or two, and learn what news affected your family on a daily basis.