The Axeman of New Orleans

Morbid accounts of the work of an ax-wielding serial killer had shaken up New Orleans for months when a mysterious and worrisome letter was printed in the local newspaper. Supposedly from the killer himself, the author claimed to be a spirit, a demon, uncatchable, and threatened to return again the following Tuesday night for more murderous mayhem. The warning came with a helpful hint, however: any house or establishment enjoying the music of a jazz band on the evening mentioned would be spared the killer’s ax. 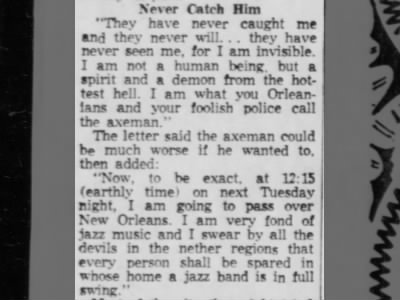 Was the letter from the killer himself, or was it a hoax? Many people joked about the letter; one man even offered to leave his window open for the Axeman if he would promise to leave the door undamaged. But despite any doubts, the night of March 18-19, 1919, was flooded with music. Jazz blared in the dance halls and amateur bands played at house parties, the music drifting through open windows. True to his word, the Axeman killed no one that night. 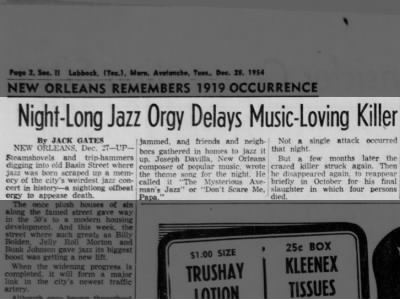 A few months later he struck and killed again, the last crime ever attributed to the Axeman. Just as the letter predicted, the jazz-loving murderer was never caught.

Try your own searches for mysteries like these using the search page on Newspapers.com.