If you have ancestors from Georgia, or you’re interested in Civil War history or Georgia history, we’re thrilled to add The Atlanta Constitution to our growing newspaper archives. We have issues dating back to 1868! 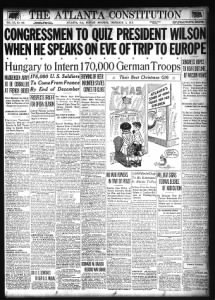 The Constitution started in 1868. The nation was just emerging from the Civil War. The city of Atlanta had been virtually destroyed just four years earlier when General William T. Sherman’s troops set fire as they left, burning 4,500 homes. Only 400 homes survived. The smoldering ruins had cooled but wounds were still raw. Atlanta was operating under martial law.

Three partners got together to buy a small newspaper, The Opinion. Carey Wentworth Styles, James H. Anderson, and W.A. Hemphill decided it was time to lift martial law and return to a constitutional form of government. They changed the paper’s name to The Constitution.

The population of Atlanta was small back then. The entire city could fit in SunTrust Park with seats to spare! Atlanta welcomed new arrivals with open arms. Help was needed to rebuild. When a ship full of immigrants from Germany was blown off course and ended up in the South instead of Baltimore, an article reprinted in the Atlanta Constitution said, “We extend a hearty welcome to the new comers.” They are “just such as are needed at this time to rebuild broken fortunes of our beloved State and City.”

Evan P. Howell, a great rebuilder of the city, bought a controlling interest in the paper in 1876. In 1887, The Constitution introduced the South’s first women’s page called “Society Salad.” It announced marriages, cotillions, anniversaries, and news from outlying communities like Buford and Conyers. It’s a wonderful resource for piecing together the family tree of early citizens.

Today, Atlanta is Georgia’s largest city and a center of culture and industry. Coca-Cola was founded here in 1891. One of the world’s busiest airport, Hartsfield-Jackson International, started out as the tiny Candler Field in 1925. Dr. Martin Luther King Jr. was born and is buried here, and the city hosted the 1996 Summer Olympics.

8 thoughts on “The Atlanta Constitution ”