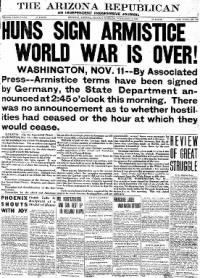 The Arizona Republic began publishing in Phoenix on May 19, 1890, under the name the Arizona Republican, a title it maintained until 1930. When the paper began publishing, Arizona was not yet a state, and though Phoenix had recently become the territorial capital, it had a population of only about 3,100, with another 3,400 in surrounding areas. The young city was still relatively undeveloped, and at the time, the economy of the Phoenix depended on the Five C’s: cotton, citrus, cattle, climate, and copper.

The Republic was initially created as a partisan paper to support the administration of the unpopular Republican territorial governor, Lewis Wolfley, though he resigned from his position not long after the paper began publication. There were already two papers in Phoenix in 1890, and the Republic struggled financially at first, but by 1915 it had become the largest paper in the state. The Republic boasted full coverage of the Associated Press wires, as well as coverage of news from the rest of Arizona and the city itself. 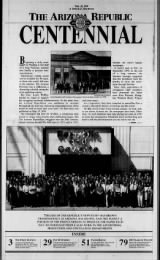 One memorable moment from the Republic’s early years was an attempt on the editor’s life in the paper’s office by some disgruntled citizens in 1892, an incident which not only sparked articles in the paper, but also a short poem. Also memorable was the paper’s trend-setting decision in 1913 to purge from its pages all ads for patent medicines, which it considered “offensive to all decent readers.”

The Republic was there for all of Phoenix’s big moments, such as the Salt River Valley flood of 1891, the range war between the Tewksbury and Graham families (which finally ended in 1892), Arizona’s admission as the 48th state in 1912, the 1917 Bisbee Deportation (which resulted in the illegal deportation from the state of more than a thousand striking miners), the dedication of the Hoover Dam in 1935, the escape of two dozen German POWS from a Phoenix-area camp in 1944, and the first college football Fiesta Bowl in 1971.

If you’re interested in learning more about the Arizona Republic, check out its 100-page 1990 centennial issue, which covers a wide range of topics related to the paper’s history. Otherwise, get searching or browsing the paper here.

15 thoughts on “The Arizona Republic ”