The Amazons, the Bodyguard…the Suffragettes

When you think of the original suffragettes, what comes to mind? Pinned up hair and modest dresses? Marches and lifted signs? Jiu-jitsu? 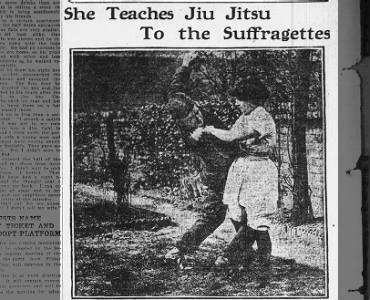 A woman named Edith Margaret Garrud, having previously learned the art of jiu-jitsu from instructors Edward William Barton-Wright (the first jiu-jitsu teacher in Europe) and Sadakazu Uyenishi, used her knowledge to teach classes of her own for the Women’s Social and Political Union in the UK. The object of “suffrajitsu,” as it was called by journalists, was to help suffragettes resist police interference in meetings and protect against arrests and rearrests. 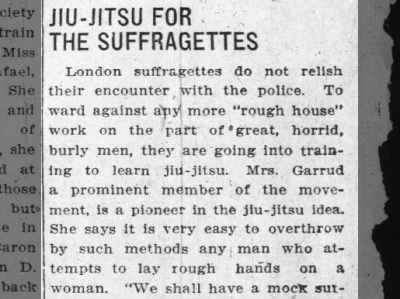 The article above does not exaggerate. This particular group of suffragettes were themselves quite militant, breaking windows and setting fires. This led to some rough handling by the police trying to arrest them despite desperate resistance. Once jailed, many of the women engaged in hunger strikes and were force fed through tubes. Later, introduction of the Cat and Mouse Act allowed for suffragette leaders to be released from jail so they would eat again, only to be rearrested for the same crimes once they’d regained their health. These sorts of rearrests were just one of the things fought against by “the Bodyguard” or “the Amazons”—the women who learned jiu-jitsu and used it to defend Suffrage leaders. 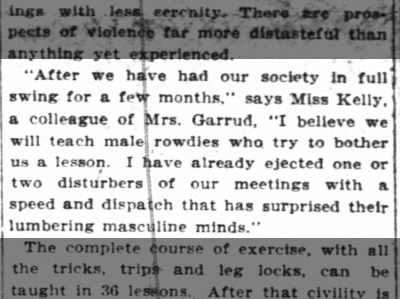 World War I slowed the movement significantly, but Garrud’s jiu-jitsu and self-defense classes continued until her retirement in the mid-20s. She lived another 50 years and died at the age of 99. Speaks well for the practice of martial arts, don’t you think?

Find more on Garrud and her jiu-jitsu suffragettes with a search on Newspapers.com, or try browsing through at your leisure for clippings of interest to you.

One thought on “The Amazons, the Bodyguard…the Suffragettes”