Ever wonder what life was like in old New Mexico? Or do you have ancestors from that area? Check out the Albuquerque Journal on Newspapers.com, with issues dating back to 1882. 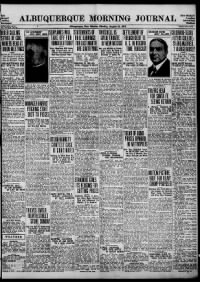 In 1887, the Morning Journal was absorbed by the Albuquerque Daily Democrat, but in 1899 the combined paper was renamed the Albuquerque Journal-Democrat. It claimed to be the only New Mexico paper at the time that published the full afternoon and night Associated Press dispatches. In 1903, the name changed once again—this time reverting to the title of Albuquerque Morning Journal. It was a self-proclaimed Republican paper, though it would later shed its party affiliation and become politically independent. The paper finally landed on the title it has today—the Albuquerque Journal—in 1926, the same year it merged with the Evening Herald.

In 1933, then-publisher of the Albuquerque Journal Thomas Pepperday changed the newspaper industry when he created the nation’s first joint operating agreement by combining the business operations of two papers (the Journal and the Albuquerque Tribune) but keeping their editorial staff separate. Other cities later followed suit and adopted this model, sometimes called the “Albuquerque Plan,” which allows cities to support two daily papers when they otherwise could only support one.

Throughout its history, the Albuquerque Journal has covered local, state, national, and international news. Today, it is New Mexico’s oldest and largest paper, with circulation throughout the state, as well as into parts of Texas, Colorado, and Arizona.

Get started searching or browsing the Albuquerque Journal on Newspapers.com!

* With a Newspapers.com Basic subscription, you can view issues of the Journal from 1882 to 1977; or, with a Publisher Extra subscription, access those early years as well as issues between 1978 and 2017.