Do you have ancestors or other family from the Tampa Bay area? Or are you interested in Florida history? Come explore the Tampa Bay Times (formerly the St. Petersburg Times), as well as the Tampa Tribune and the Tampa Times, on Newspapers.com! 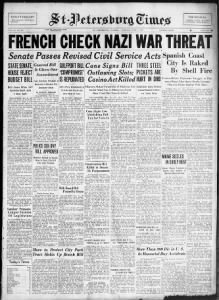 Perhaps the most notable figure in the St. Petersburg Times’ history is Nelson Poynter, who was at various points the Times’ general manager, editor, and majority stockholder. The Times’ flourished under Poynter’s hand, becoming the respected, Pulitzer Prize-winning paper it is today. Upon his death in 1978, Poynter willed most of the paper’s stock to a non-profit journalism school (today’s Poynter Institute), ensuring that the Times’ could remain independent and locally owned.

The Tampa Tribune, prior to its demise, had its own long history, dating back to the 1890s. In the 20th century, that history became interwoven with a paper called the Tampa Times (founded in 1893), which the Tribune purchased in 1958 and continued to publish until 1982.

All three papers—the Tampa Bay Times, the Tampa Tribune, and the Tampa Times—have recorded the happenings of the Tampa Bay area since the 19th century and provide a wealth of information on the history and inhabitants of the area. For instance, if you’re curious about Tampa’s famous Cuban cigar industry, take a look at this page from the 17 December 1922 issue of the Tampa Tribune celebrating the industry’s most productive year up to that date. Or if the region’s inhabitants are what interest you, take a look at these great photos from a 1941 state band competition that were featured in the Tampa Bay Times (then the St. Petersburg Times).

Get started searching or browsing the Tampa Bay Times, the Tampa Tribune, and the Tampa Times on Newspapers.com. With a Basic subscription, you can access issues up to 1922; or with a Publisher Extra subscription, access those early years as well as issues from later years.