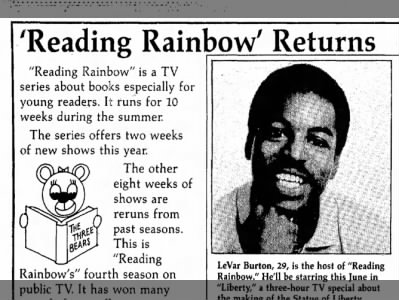 If you’ve been on the internet in the last forty-eight hours you may have heard of LeVar Burton’s recent and insanely successful campaign to bring the old TV favorite Reading Rainbow back to life. This time it will return as a free online service for schools rather than the television show so many saw and loved. Newspapers, of course, document the 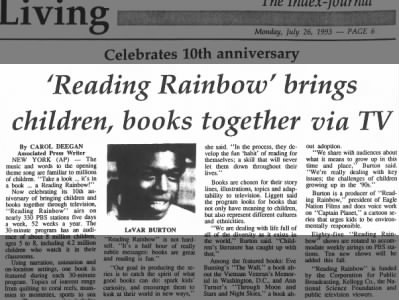 progress of recent news as well as more historical stories, and in the pages of Newspapers.com we see the journey of this beloved children’s show from start to close.

Reading Rainbow premiered in the summer of 1983 as a charming educational program that encouraged children to explore the magical world of literature. LeVar Burton had already gained some fame with his portrayal of Kunta Kinte on the drama series Roots when he jumped into the Reading Rainbow project as host and executive producer. The program featured 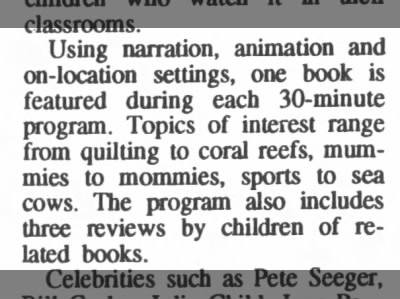 book readings by Burton and other celebrities over a backdrop of whimsical animation and historical scenery that tied in with the settings of the books. Burton brought diverse topics to the screen for his young audience, and children joined him on the show with reviews of books similar to the one featured in each episode to encourage further reading.

The show went on to air for an impressive twenty-six years, longer than any children’s show PBS had run before. It also won a slew of awards, including twenty-six Emmy Awards, and Burton himself was granted a dozen 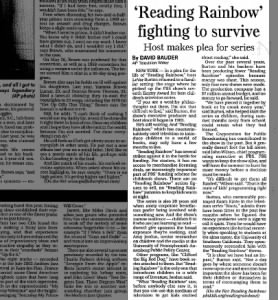 Emmy Awards as a host and a producer. But as with so many things, funding grew tight, and in 2003 Burton himself made a plea for contributions to keep the show running. It seems to have worked, but not for much longer. The summer of 2009 saw the last televised season of Reading Rainbow.

For more articles about Reading Rainbow, check out this search. You can also look for other more recent news stories by narrowing down the year range—just click the “see advanced” or “add more info” menu on the right of the search bar and enter in your dates of choice. For a general search of the articles on Newspapers.com, try the search page or browse through our collection.