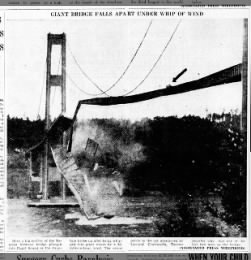 On November 7, 1940, at 11 a.m., the Tacoma Narrows Bridge collapsed into Puget Sound just four months after its opening.

Although locals had wanted a bridge between Tacoma and the Kitsap Peninsula for decades, it wasn’t until the U.S. military got behind the idea as a defense measure that the idea became a reality. Construction began on November 23, 1938, and was finished a little over a year and a half later. At the time of it’s opening on July 1, 1940, the bridge was the third-longest suspension bridge in the world, with a center span 2,800 feet long. It was extremely slender, with a deck just 2 lanes (39 feet) across and 8 feet deep, making it the most flexible suspension bridge in the world.

Before the bridge opened to the public, workers noticed that even in light winds the bridge deck developed rippling vertical waves and nicknamed the bridge “Galloping Gertie.” The motion was sometimes so pronounced that it caused some workers—and later motorists and pedestrians—to feel motion sick. Bridge engineers worked to find a solution to dampen the bridge’s movement, but when initial methods failed, they hired a university professor to solve the problem. The professor’s report was released just a week prior to the collapse and before any of his suggestions could be implemented. 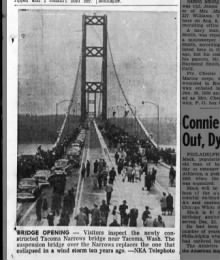 On the morning of November 7, under winds that eventually reached 42 mph, the bridge began its typical undulations. The waves became so bad that the bridge was closed to traffic. Finally, one of the cable bands slipped, and the bridge took up a new twisting (torsional) motion. The unexpected twisting (caused by the bridge’s design and aereoelastic flutter) put too much stress on the bridge, and it collapsed 190 feet into the Sound. The only fatality was a dog in a car abandoned on the bridge.

World War II interrupted the rebuilding of the bridge, so the new Tacoma Narrows Bridge wasn’t completed until 1950. The new “Sturdy Gertie” bridge, which abandoned the extreme slenderness of the old bridge, is still in use today.

Do you have any family stories about the Tacoma Narrows Bridge? Tell us about them! For more information about the collapse, start a search on Newspapers.com.