Stories that Haunted the Papers

The frosty fall season has once again settled over the northern hemisphere. For some that means warming up against the cold, while for others it’s prime time to get those goosebumps going. We’ve got the latter covered with today’s post, which features three ghost stories that have haunted past papers. Are the tales real, or just stories meant to thrill and chill? You can be the judge.

There’s something about an enclosed space that lends itself to creepiness, isn’t there? And if you take that enclosed space underground, it only gets worse. This 1887 story recounts the harrowing experience of Mr. Bennett, whose qualifications as a reliable source speak for themselves. 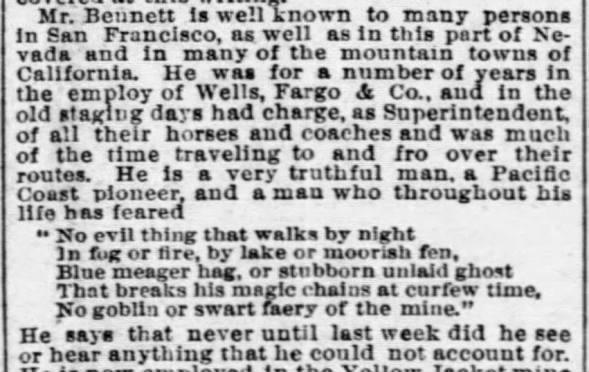 Mr. Bennett is very truthful, and has feared “…No goblin or swart faery of the mine.” Sun, Nov 27, 1887 – 9 · The San Francisco Examiner (San Francisco, California) · Newspapers.com

Bennett worked in Nevada’s Yellow Jacket mine, which made the news nearly two decades earlier following a deadly fire. Stories had since been told of unexplained sounds and sights in the mine, but Bennet didn’t believe them. That is, not until the day he had to retrieve a pair of shovels from the empty 1000 level.

Bennett found the shovels and was descending the ladder back to the 1100 level when he heard footsteps. At first Bennet thought it was the foreman, Pete Langan. But Langan would have used a light, and the footsteps were approaching from complete darkness. 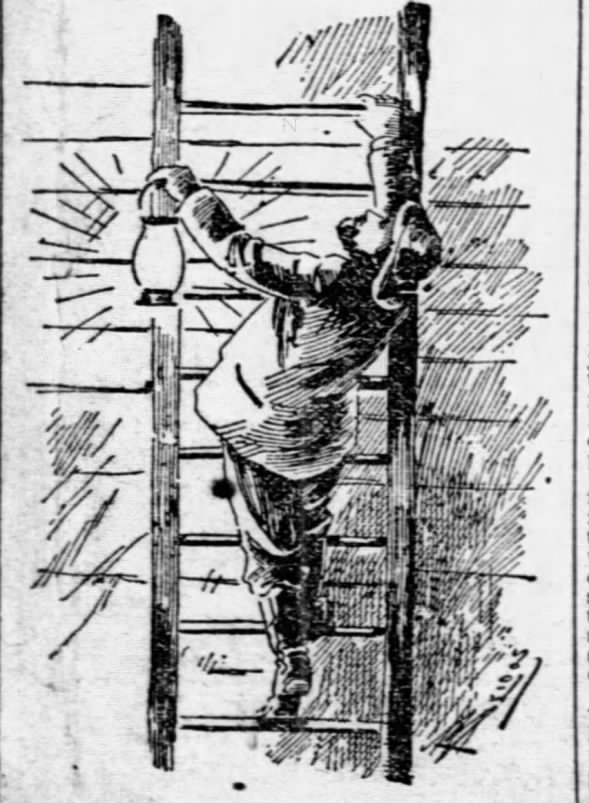 He called out to ask who it was, and heard no answer but the footsteps coming closer. Suddenly, the two shovels held under his arm were “violently thrust forward and sent flying.” They tumbled down the ladderway until they came to rest 30 feet away.

Made it to Safety

Bennett scrambled back to the other workers, who confirmed Pete Langan had been above ground throughout his experience. Bennett, who once “went by himself through all parts of the mine with no thought of fear,” refused to return to the haunted 1000 level ever again.

The full article can be read in these clippings: Part 1, and Part 2

This next story is also from the late 1800s and reads a bit like a Gothic horror story. The author, Tom, was hired to replace a lighthouse-keeper who had “deserted his employ” months before and hadn’t been heard from since. He was told the man had a pretty wife, and the two were suspected of having disappeared so effectively because they’d stolen some items of value from the lighthouse.

Tom asked the temporary keeper, Morgan, to stay with him the first night and teach him the ropes. Morgan was reluctant, and Tom noted his face looked haggard and anxious, but he agreed. He skipped the tour of the cellars while showing Tom around the lighthouse, claiming they were never used anyway, and the night passed unremarkably. Morgan was all too eager to leave the next morning, and gave only one strange bit of advice. 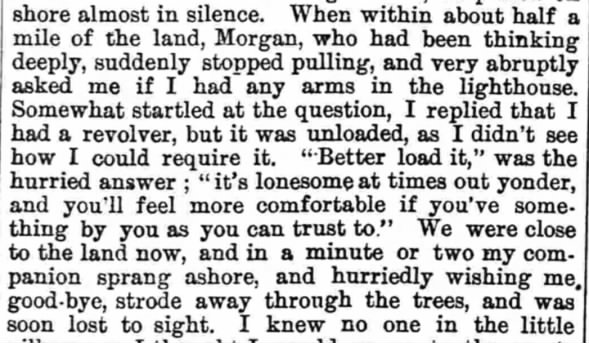 It wasn’t until his second night spent alone in the lighthouse, a moonless Saturday evening, that Tom had his first taste of the supernatural. 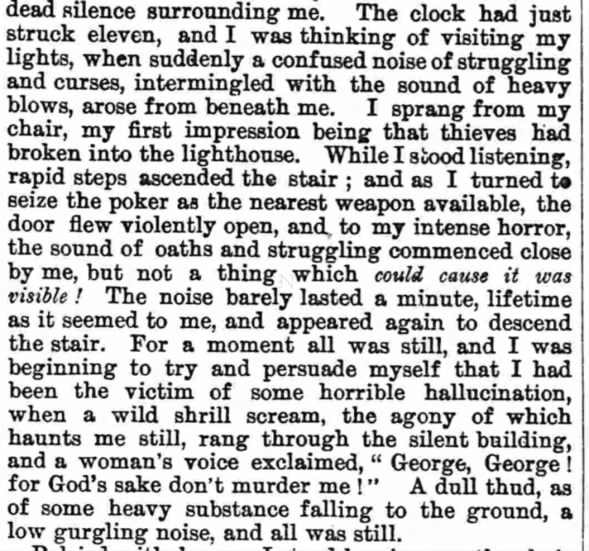 After some time spent frozen in terror, Tom worked up the courage to explore the cold, clammy cellar with his lantern (and revolver) in hand. Despite all that he had experienced, there was nothing unusual to be seen. He secured the cellar door and spent a sleepless night at the top of the lighthouse.

The next day he went back to shore to share what had happened with Mr. Thompson, the man who’d hired him. Thompson was skeptical, but sent a man named Wilson to stay a few days with him. Wilson helped him nail the cellar door shut, but of course the days passed with no further unexplained events. Wilson left, and Tom felt foolish…until that Saturday evening, when the events occurred again exactly as they had the week before. 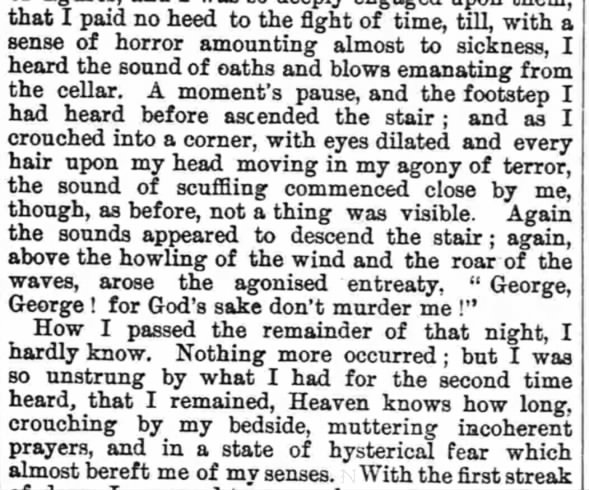 An exasperated Mr. Thompson once again sent Wilson to act as witness to any further oddities, and made plans to come himself the next Saturday evening. Aside from the unnerving discovery that the nails in the cellar door had been forcibly ripped out, Wilson and Tom passed that week quietly. On Saturday Thompson arrived, and all three men took up position directly outside cellar door.

As the clock chimed 11, they heard the shouting and blows begin. The door flew open, and the voice screamed as it had before. This time a violent vision played out before their eyes: 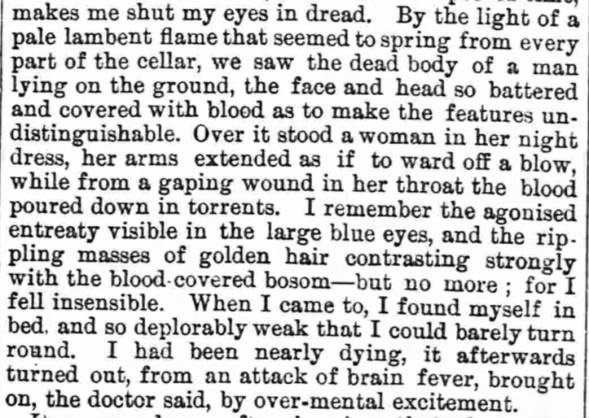 Mr. Thompson arranged an investigation of the cellar and found the bodies of a man and woman, identified as a local farmer and the wife of the former lighthouse keeper. They tracked down the keeper and got his confession. He’d suspected an intimate relationship between his wife and the farmer, and had killed them both in a jealous rage despite his wife’s protestations of innocence.

And thus the ghosts of the wronged who had haunted that lonely lighthouse could rest, their mystery now solved. The full article can be read here.

This story may be more familiar, especially to those who have visited the Tower of London before. The famous castle-prison has its fair share of grim history, perhaps most notably as the site of multiple royal executions during the reign of Henry VIII. His second wife, Anne Boleyn, is one of those. And according to several newspaper articles across the years, her ghost makes regular appearances at the Tower to this day. 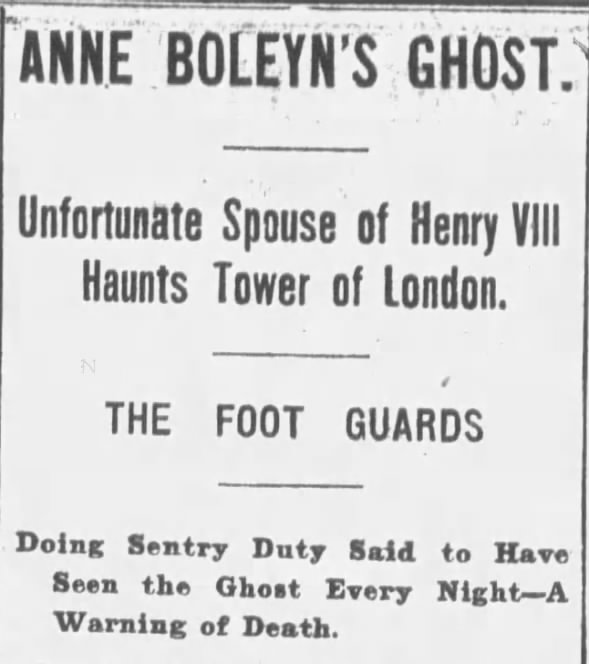 One story says a sentry heard a scream during his rounds. He ran to the sound and found a fellow guard unconscious beside his rifle. When the affected guard came to, he was in such a state of distress that he was unable resume his post.

Under questioning, he finally revealed what had happened. 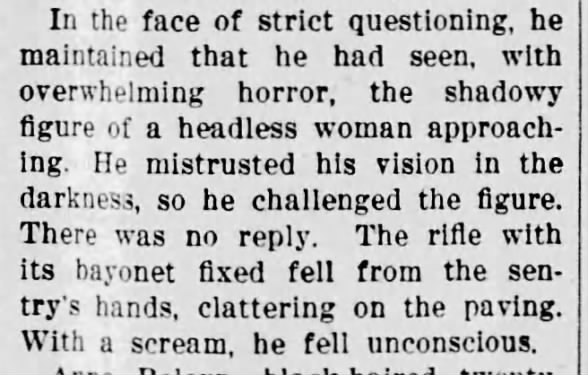 A sentry at the Tower of London recounts his experience with the ghost of Anne Boleyn Fri, May 5, 1933 – 5 · Deerfield Valley Times (Wilmington, Vermont) · Newspapers.com

Another favorite Anne Boleyn story centers the captain of the guard, who once saw a light coming from the Tower chapel. He climbed a ladder to investigate and saw a 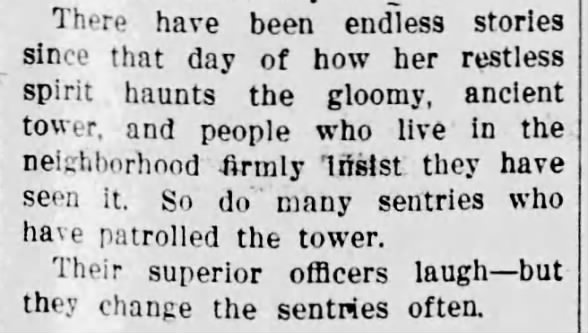 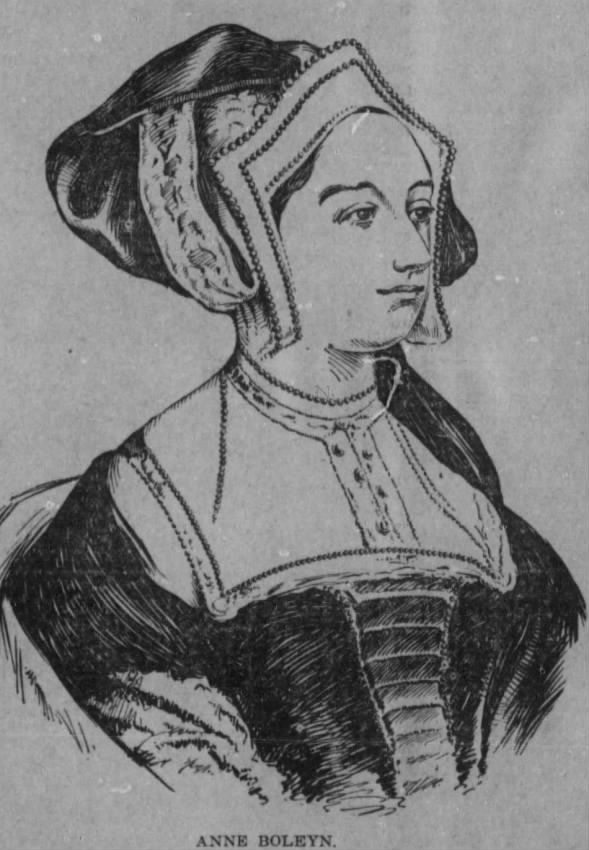 Try a search on Newspapers.com for more on these and other ghost stories!

3 thoughts on “Stories that Haunted the Papers”