On October 4, 1957, the Soviet Union launched Sputnik— the first manmade satellite—into orbit. It was one of the instigating events of the Cold War Space Race and one that ignited fears in the United States regarding perceived Soviet superiority. 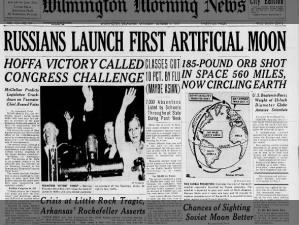 In 1955, the United States—and a few days later the Soviet Union—announced that it would launch an artificial satellite during 1957, the International Geophysical Year, which was set aside as a time to focus on scientific research. Though the United States had the missile technology to launch a satellite, the Soviet Union beat them to it, launching Sputnik—a 2-foot sphere carrying a radio transmitter—on October 4 from the Baikonur Cosmodrome, in what is today Kazakhstan. The satellite’s radio signals, heard as a series of beeps, could be picked up by amateur radio operators around the world as Sputnik orbited the earth.

Then, a month later, on November 3, before the United States could launch its own satellite, the Soviet Union launched Sputnik 2, which carried a dog into space. The U.S. finally announced its own satellite, to be carried by the Navy’s Vanguard rocket, but the actual launch on December 6 ended in failure. It wasn’t until January 31, 1958, that the United States successfully launched a satellite known as the Explorer 1, using a Juno I rocket based on a pre-existing Army-designed missile.

The Soviet launch of Sputnik months before America launched its own satellite sparked what became known as the “Sputnik crisis,” as the American public grew worried that the launch of Sputnik indicated a Soviet technological and scientific superiority. Anxiety also grew over national security, as the Soviet satellite launch seemed to confirm a “missile gap” between the two nations, with the Soviets appearing to come out on top. In response to these fears, President Eisenhower announced the creation of NASA (the National Aeronautics and Space Administration), and the U.S. also revamped its education system to emphasize math, science, and engineering.

The Space Race between the U.S. and Soviet Union peaked in 1969 with the United States’ moon landing, though it would continue with varying intensity until the USSR’s dissolution in 1991.

Do you have any stories about Sputnik? Share them with us! Or find more newspaper stories about the event by searching Newspapers.com.