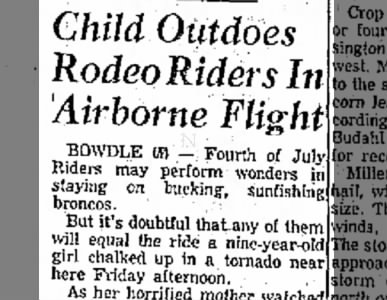 The popular film The Wizard of Oz includes an improbable scene where Dorothy, Toto, house and all are lifted into the air by a massive tornado. Surprisingly enough, this experience has happened—without the witches and magical technicolor world—to more than one person in real life. One of these was nine-year-old Sharon Weron, who was taken for quite the unexpected flight atop her pony. 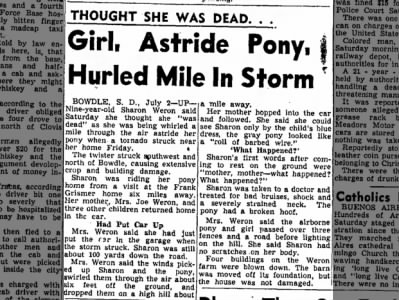 The whole experience began uneventfully enough; the family had been visiting some friends nearby to pick up a horse and was headed home. Sharon’s mother Marion and three other siblings had opted to take the car, while Sharon followed at a slower pace on the pony. Marion had just parked the car in their home’s garage when she saw the twister take Sharon over, lifting her into the air like a leaf on the wind. With 100 yards of open road between them, Marion could only watch in shock as her daughter and the horse were tossed away. 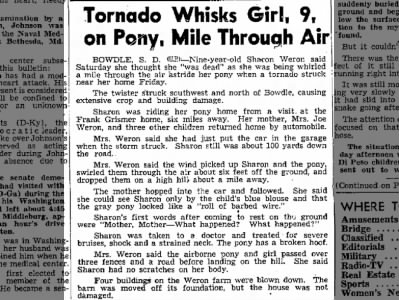 Like a scene from a film, Marion jumped into a farm vehicle to follow the twister, tracking Sharon by the blue of her blouse. As the article to the left states, Sharon’s mother recalled that “the gray pony looked like a ‘roll of barbed wire.'” At the homestead, the two oldest children left in the family car, 8 and 5, held down the brakes as the storm buffeted the vehicle.

When the tornado abated and Marion arrived at the scene, Sharon was miraculously unharmed other than a few severe bruises and a strained neck. In the shock of the moment, her first words to her mother were, “What happened?” The pony was also mostly unscathed, with a broken hoof his only injury to show for taking a mile ride in a tornado. 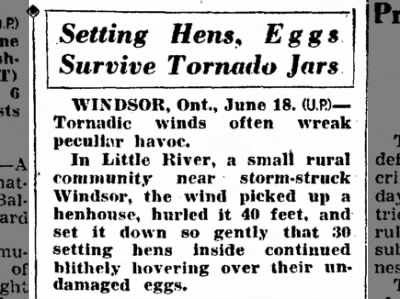 Newspapers collect many such unexpected stories. Eleven-year-old Scott Anticzak was another to survive the harrowing experience of being man-handled by a twister, and Pennsylvania’s the Daily Courier tells of another tornado-flight survivor, Park Pile. Pile’s story is especially interesting in that just moments after he was unexpectedly blown away from the side of his car, a detached roof landed on the vehicle. And in another twist, a tornado so gently relocated a hen house that the hens were found inside among their completely intact eggs, perfectly content.

Search for Sharon Weron on Newspapers.com to find more articles about her jaunt through the sky, or look for other interesting survival stories using the search bar.