On December 5, 1914, Ernest Shackleton, along with 27 crew members, set sail from the tiny whaling village of Grytviken on South Georgia Island. The expedition hoped to make the first crossing of the Antarctic continent. Instead, they encountered horrific gale winds and ice that destroyed their ship Endurance. The men spent nearly two years trekking across ice floes and struggling to stay alive. Miraculously, every man survived! This is the story of Shackleton’s expedition straight from the headlines as it happened. 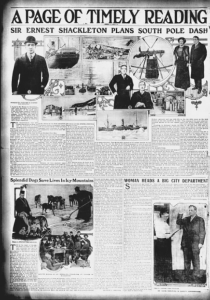 Soon after leaving Grytviken in December, the Endurance entered the Antarctic ice pack and crossed the Antarctic Circle. In January, Shackleton spotted “200 miles of coastline and great glaciers discharging into the sea.” The crew had reached part of the Antarctic continent they named Caird Coast.

On January 18th, Endurance encountered gale force winds and ice closing in. Forced to take refuge behind a large iceberg, Endurance soon became stuck in ice. Unable to navigate, she drifted for 10 months. At one point, “the pack drove the ship towards a great stranded berg, and we were saved only by a sudden change in the drift,” wrote Shackleton. 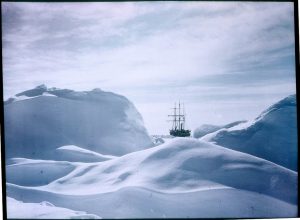 Winter turned to spring, followed by summer. Still encased in ice, pressure mounted on Endurance. Her hull creaked and groaned, and by September her beams buckled. Unable to resist the pressure any longer, the sides of the ship opened up. Shackleton wrote, “Endurance hove bodily out the ice and was flung before the gale against masses of up-driven ice.”

Shackleton gave orders to abandon ship. Three lifeboats, dogs and provisions were lowered to the ice. The crew began a trek across the ice, but cracks and pressure ridges made travel precarious. The journey was “further endangered by the presence of killer whales, which would not hesitate to attack any man unfortunate enough to fall in,” wrote Shackleton. 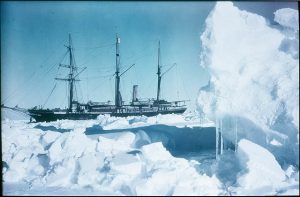 On November 21st, the crew watched as Endurance sank. Relying on a series of camps, the men began a slow march toward open water. The crew survived subfreezing temperatures, hurricane force winds, and food shortages. By spring, Shackleton ordered the dogs shot and eaten. In March, they averted tragedy when a crack opened up separating the crew from their lifeboats. They managed to retrieve them.

After five more long months, they spotted land! Elephant Island appeared on the horizon. The men boarded lifeboats and reached the island after a horrendous seven-day journey. In a last-ditch attempt at rescue, Shackleton and five others set sail for South Georgia Island. They rowed and sailed 800 miles over two weeks in rough seas, bailing out water during the journey. Miraculously they made it. All attention then turned to the rescue of the men on Elephant Island. After three failed attempts, Shackleton’s fourth try was a success! On August 30, 1916, 634 days after leaving South Georgia, the remaining crew of the Endurance was rescued from Elephant Island.

To learn more about Shackleton’s Endurance expedition, search our archives on Newspapers.com!