Step aside, Scrooge. There’s a new Christmas villain in town, and he is a fuzzy, green, cave-lurking hermit known as the Grinch. He is one of the many creations of Ted Geisel–or as we know him, Dr. Seuss. 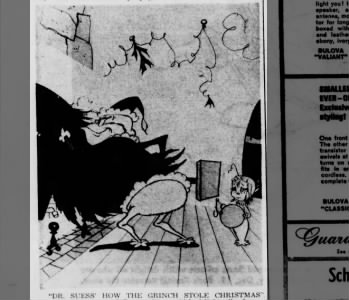 Okay, so maybe calling the Grinch a “new” villain is a bit of a stretch today. But 49 years ago to the day, that dastardly Christmas-hating creature made his first T.V. appearance in Dr. Seuss’ How the Grinch Stole Christmas! The book by the same name had been published by Dr. Seuss in 1957, but was adapted for television as a 26-minute-long Christmas special that has since become a classic. 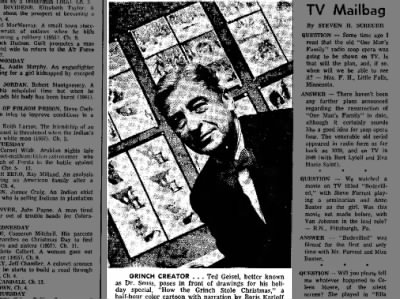 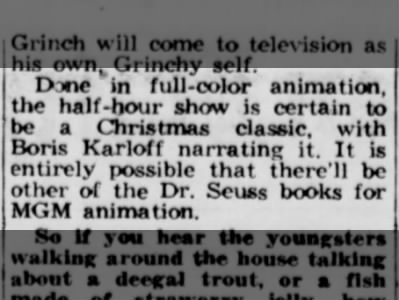 With script and song lyrics by Dr. Seuss himself, and narration and the voice of the Grinch provided by Boris Karloff, How the Grinch Stole Christmas! fell neatly into place among the other Christmas classics that emerged during the mid-60s surge of seasonal specials (such as A Charlie Brown Christmas, which aired the previous year.) 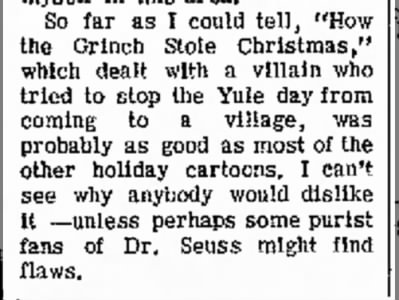 It was the first of Dr. Seuss’ imaginative stories to be adapted for television or film, and it has been aired regularly during the Christmas season ever since.

Check out more articles on the Grinch and the Whos in Whoville using this search, or try a search of your own using Newspapers.com’s search page.