The Accidental Start of the NORAD Santa Tracker 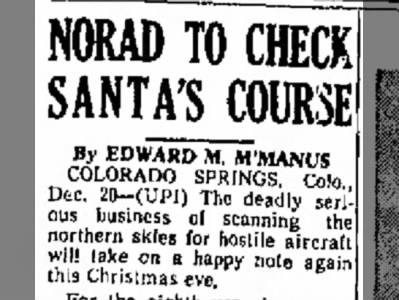 Don’t you just hate accidentally calling the wrong number? Especially if that number happens to be the top secret phone line for the Continental Air Defense Command?

A typo in a 1955 Sears ad led to just that sort of mix up. The ad encouraged children to call a number and speak directly to Santa Claus, but instead of ringing up the North Pole, the printed number would take callers straight to the ominous red phone reserved exclusively for national crises in the Colorado Springs CONAD (now NORAD) office.

Imagine the dread U.S. Air Force Col. Harry Shoup must have felt when that red phone rang. When he answered it was not the Pentagon who replied, but a little boy excitedly asking if he was speaking to Santa Claus.

At first Shoup reacted harshly, thinking it was some kind of prank. But when the little boy began crying, Shoup decided it was best to play along. He ho-ho-ho’d and asked the boy if he’d been good. He then spoke to the child’s mother who explained that a Sears ad had printed this phone number for anyone to call. Whoops. 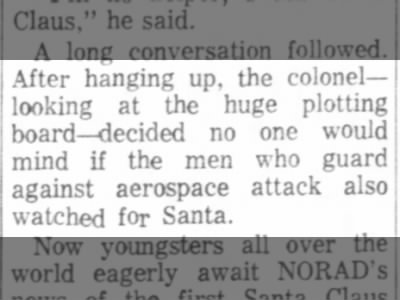 The calls kept on coming, and Shoup, who was considered a pretty straight-laced and disciplined man, decided to humor the callers. He assigned men to take the calls and pretend to be Santa Claus. That Christmas Eve, Shoup walked into the office to find Santa’s sleigh drawn on the board they used to track airplanes in the country, a little joke. The airmen responsible worried that Shoup would be annoyed, but instead the colonel called a radio station and announced that an unidentified flying object had been spotted—Santa’s sleigh!

From then on, CONAD (and then in 1958, NORAD) continued the tradition of taking Christmas calls and tracking Santa Claus every Christmas Eve. They just made sure to use a different telephone number. 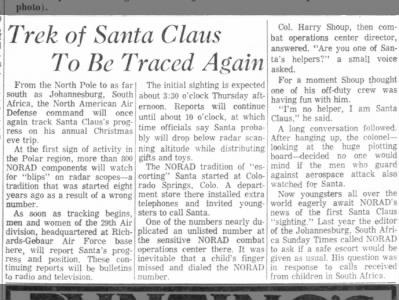 Visit NORADs Santa tracker here to see where Santa goes this Christmas Eve. Check out Newspapers.com for more articles about Christmas and other holidays.