In 1937, cartoonist Al Capp released a strip of his popular comic Li’l Abner that focused on the plight of homely Sadie Hawkins, a character with a made-up name that would go down in history: 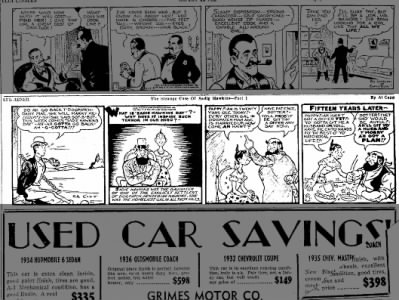 As the story goes, Hekzebiah Hawkins lives with his unattractive daughter, Sadie Hawkins, in the mountain town of Dogpatch, Arkansas. When she turns 35 and still has no suitor in sight, Hekzebiah decides to take drastic measures. He calls all the lads in town together and tells them that whoever Sadie catches will have no choice but to be her hubby. Ready. Set. Go!

The Sadie Hawkins comic was meant to simply further the overall story arc in Li’l Abner, but the idea caught on like wildfire. Only two years after the strip was printed, Sadie Hawkins Day became an unofficial holiday, celebrated as a day for girls to take up the reins and do all the things that, especially at the time, were considered the boy’s duty. Most celebrations were done by schools and included a dance, and girls were encouraged to snatch up a guy to bring along as their date—and probably pay too.

The idea of Sadie Hawkins Day was so popular that Al Capp included it in his strip every November, a tradition which lasted for forty years. Here is one from 1939, showing the reactions of the poor menfolk of Dogpatch (including “Li’l” Abner himself, the 6’3″ dreamboat with hair like Clark Gable) regarding Sadie Hawkins Day: 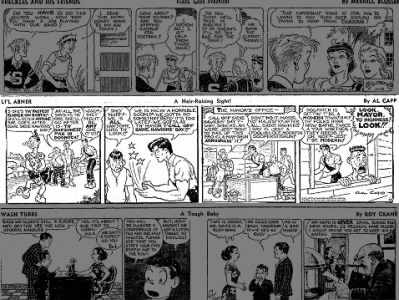 Sadie Hawkins Day was everywhere, celebrated in thousands of venues. Just look up “Sadie Hawkins Day” on Newspapers.com and you’ll find hundreds of results from articles talking about the day, what it means, and where it came from, along with a lot of pictures from costume competitions of Li’l Abner and his (eventual) sweetheart, Daisy Mae, like in this article from 1949: 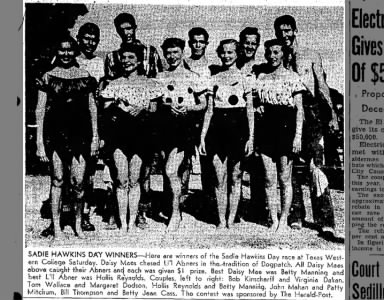 Inspiration for the concept of Sadie Hawkins Day is thought to have potentially come from reversing the Greek myth of Atalanta, which tells of a woman with great beauty—and awesome running skills—who would not marry any man unless he could beat her in a footrace. (In unrelated but still interesting news, Atalanta was also the inspiration for the 1920s Studebaker hood ornament.)

However it originated, Sadie Hawkins Day became bigger than anyone could have expected, and is still practiced in many places today. Some of the dances may have different names now (MORP, TWIRP, vice-versa dances, and more), but they are all thanks to Al Capp and his homely Sadie Hawkins.