Ever heard of Aunt Sammy? While she’s mostly been forgotten today, those who do remember her often do so because of the classic cookbook Aunt Sammy’s Radio Recipes.

But Aunt Sammy’s story stretches beyond a century-old recipe book. In fact, a 1927 newspaper article once noted that “she has reached directly more people than any feature of the government service ever instituted.”

Aunt Sammy hosted Housekeepers’ Chat, a beloved American radio show from the 1920s and ‘30s. It debuted on October 4, 1926, on 30 radio stations as part of the U.S. Department of Agriculture’s farm radio program.

Housekeepers’ Chat started out as a 15-minute program that aired every weekday. Each show was divided into 3 segments: an informative portion on homemaking topics, a segment answering listener questions, and one providing menu ideas and recipes.

The show was originally intended for women in rural areas, but it became popular in cities as well, and within a few years it was being aired on nearly 200 radio stations around the country. 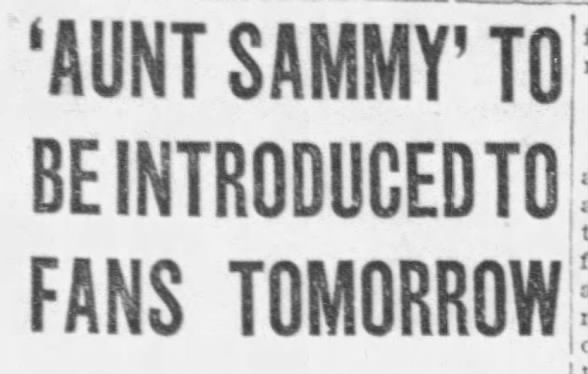 For all her popularity, Aunt Sammy wasn’t a real person. She was a fictional character (Uncle Sam’s wife, in fact), created by the Bureau of Home Economics for the radio show.

But Aunt Sammy was unique among radio characters because she wasn’t voiced by one woman. Rather, 150 different women from across the U.S. brought Aunt Sammy to life.

The women all read from the same scripts (written by experts at the Bureau of Home Economics), but each performed the character at their local radio station in their own regional accent. There was even a Japanese-speaking version of Aunt Sammy in Hawaii. 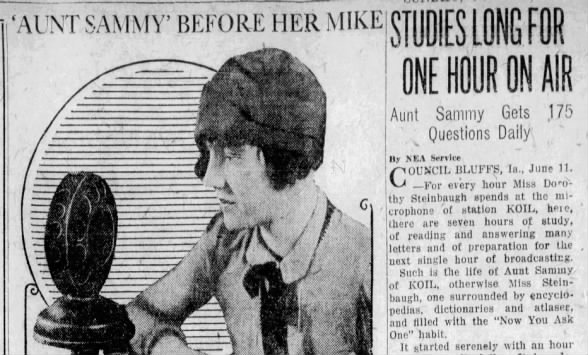 “Spicy and Full of Pep”

Not only did Aunt Sammy sound like a local, but she was also written to feel like a favorite neighbor popping in to chat. She was funny and friendly, with one newspaper columnist describing her show as “spicy and full of pep” in 1926.

Armed with straightforward advice and practical recipes, Aunt Sammy not only guided American women through times of change in the 1920s (the transition to electrical appliances, for example), but she also kept them company during the worst years of the Great Depression. And millions of listeners loved her for it. In a span of just 4 months, Aunt Sammy reportedly received 25,000 fan letters. 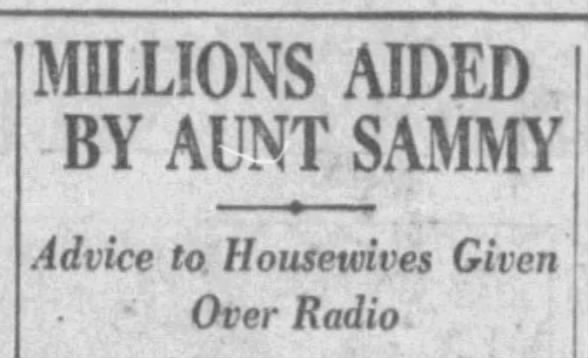 Though her listeners valued Aunt Sammy’s advice, the most popular segment of the show was her recipes. Aunt Sammy could be counted on for foolproof, “moderate” cost recipes that the average home cook could make with a minimum of hassle.

Some of the recipes even went “viral.” After her recipe for Apple Upside-Down Cake aired on the radio, more than 40,000 people reportedly wrote in for a copy!

When the Bureau of Home Economics released Aunt Sammy’s Radio Recipes in 1927, more than 100,000 copies of the cookbook were distributed in just 3 months. And one newspaper article estimated that by 1950, nearly 2 million copies of the recipe book and its revised editions had been snapped up by eager fans. It was even the first American cookbook published in Braille! 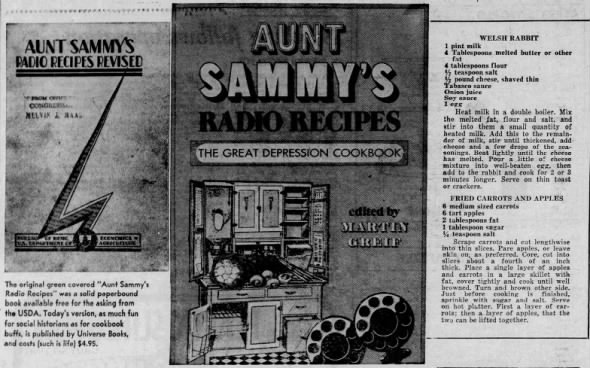 Aunt Sammy was retired as a character by the mid-1930s, and the radio show itself ended about a decade later. But people’s love of her recipes lived on, and we found a number of them re-printed in old (and some not-so-old) papers on Newspapers.com™!

Here 10 of them. (Click the links to view the recipes.)

Did anyone in your family have Aunt Sammy’s cookbook? Share your memories with us in the comments!