Recipes for the Holidays 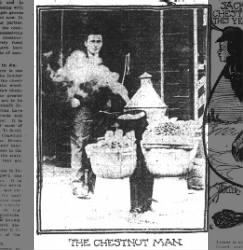 “Chestnuts roasting on an open fire …” Favorite foods and holiday recipes conjure up warm memories of sharing special times with family and friends at this time of year. At Newspapers.com, we’ve added a modern touch to the recipe box overflowing with yellowed newspaper clippings, and bring you a few vintage recipes to try this season via digital clippings online. 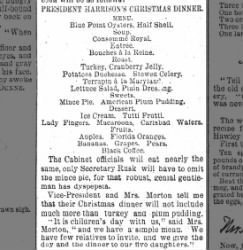 Recipes from the social leaders of our nation’s capital in 1889 include Mrs. Harrison’s Sausage Rolls and Mrs. Miller’s Mince Pie. The menu from the President Harrison’s Christmas Dinner includes terrapin and Blue Point oysters, which sound tantalizing, but we’ll pass on the stewed celery.

Even though Hanukkah 2013 has passed, potato latkes can satisfy cravings throughout the year. While Aunt Sophie’s Fruit Compote and Bimuelos add a perfect sweet addition to any holiday menu.

The best plum pudding is one of many variations in an 1892 Atlanta Constitution article which also features a drawing of someone serving the pudding “à la fifteenth century.” Christmas plum pudding joins venison and fruitcake in holiday recipes published by the Galveston Daily News in 1910, while cranberry pudding won first place in a 1930 holiday recipe contest in Huron, South Dakota. 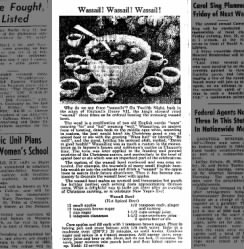 Wassail is a British holiday tradition, but who would imagine it being incorporated into Christmas Wassail Bread? To continue with the modern twist, be sure to check out the Cranberry Christmas Tree Cake on the same page.

“There is a certain charm about a little home candy frolic in Christmas week,” according to an 1897 column offering recipes for peanut caramels, chocolate cream drops, and almond candy. Are we hungry yet!?

Enjoy these vintage recipes in your own holiday test kitchen or look for a few of your own. Place your favorite recipe name or ingredient in the search box at Newspapers.com and discover old or new traditions to add to your holiday menus. Adjust the date settings and see how far back in history your favorite holiday indulgence may take you.