Ratification of the Constitution

On this day in 1788, New Hampshire became the ninth state to vote “yea” on the debate of ratifying the U.S. Constitution, officially making it law. 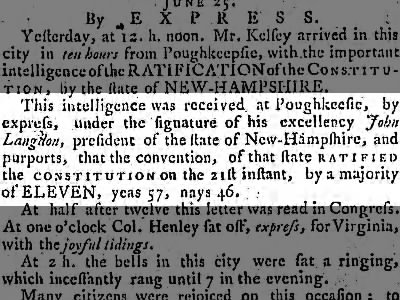 More states would follow suit later, but only nine of the thirteen existing states had to accept for the Constitution to become valid.

Fun fact: While the United States is a fairly young country compared to others worldwide, it has the oldest written constitution still in use today.

Find more about this defining moment in history with a search on Newspapers.com.

2 thoughts on “Ratification of the Constitution”