If you have ancestors from southeastern Iowa or northwestern Illinois—or if you’re interested in the history of these two regions—come explore the Quad-City Times on Newspapers.com. 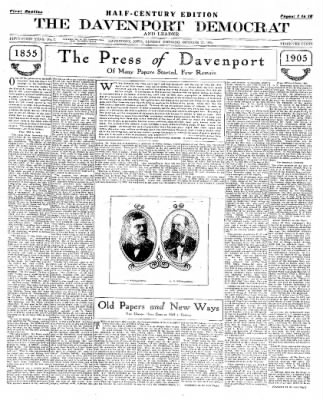 The Quad-City Times has existed under that name since 1975, but it was previously called the Times-Democrat because in 1964 the paper was formed by the merger of two papers: the Daily Times and the Morning Democrat (found on Newspapers.com under the Quad-City Times). The Daily Times‘ history was fairly straightforward, starting out as the Blue Ribbon News in 1878, before becoming the Northwestern News in 1879 and then finally the Davenport Daily Times in 1886.

As its name implies, the Quad-City Times serves the Quad Cities area of Iowa and Illinois (Davenport, Bettendorf, Rock Island, Moline, and East Moline), as well as the surrounding counties. The Quad-City Times, along with the earlier papers it grew out of, has documented more than a century and a half of goings on in the region. From big events (like the 1901 fire that burned 8 blocks of Davenport) to smaller occasions (like weddings and school excursions), these newspapers were there to capture local happenings, making the papers a great resource for finding stories about your ancestors or learning more about area history.

Get started searching or browsing the Quad-City Times on Newspapers.com!