On December 5, 1933, Prohibition came to an end with the repeal of the 18th Amendment to the U.S. Constitution, which had outlawed the manufacture, sale, and transport of alcohol since 1920. 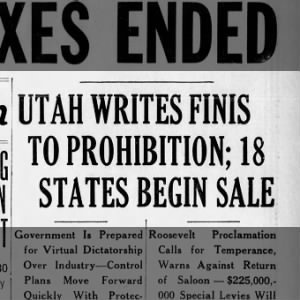 The passage of the 18th Amendment had been the result of decades of work by religious and progressive groups to permanently eliminate the consumption of alcohol in the United States. Groups such as the Woman’s Christian Temperance Union and the Anti-Saloon League believed that getting rid of alcohol would remove many of society’s ills. Brewery-owned saloons, in particular, were seen by temperance and prohibition groups as the root of many evils, and these establishments were targeted by activists such as Carrie Nation, who became famous for smashing up saloons.

Finally, by late 1917, there was enough support in Congress to pass the 18th Amendment, which was ratified by the states in early 1919. Prohibition was set to go into effect in 1920, and in preparation, the National Prohibition Act (more commonly known as the Volstead Act) was passed in late 1919. Under the Volstead Act, it was illegal to manufacture, sell, or transport any beverage with an alcohol content of more than 0.5%. Exceptions were made for medical or religious needs, and it was still legal to drink in your own home and to make wine for personal use.

Though Prohibition did see an overall decline in alcohol consumption in the country, it had many unintended consequences. It was illegal to sell alcohol, but it wasn’t illegal to buy or drink it, which led to the rise of a black market alcohol industry of bootleggers and smugglers. This strengthened organized crime syndicates, who made significant amounts of money off illegal alcohol. Gang violence increased, perhaps most notoriously in Chicago, and criminals such as Al Capone became household names. With so much money to be made from black market alcohol, bribery of Prohibition agents, police, judges, and politicians was rampant.

These and other issues—such as the onset of the Great Depression—as well as the rise of powerful anti-Prohibition groups (such as the Women’s Organization for National Prohibition Reform), finally turned the tide against Prohibition. The 1932 Democratic Party platform was anti-Prohibition, and when Democratic candidate Franklin D. Roosevelt won the presidential election, anti-Prohibition forces passed the 21st Amendment in Congress. The amendment, which repealed Prohibition, was quickly ratified by the states, with Utah casting the deciding vote in favor of repeal on December 5, 1933.