“Extra!” screamed late-edition newspaper headlines on the evening of September 6, 1901, “President McKinley has been shot.” The crime had occurred earlier that day at about 4 p.m. while President William McKinley was shaking hands during a public reception at the Pan-American Exposition in Buffalo, New York.

The popular president had given a speech at the exposition the day before and returned the following day to hold a short meet-and-greet with the public. The assassin, 28-year-old would-be anarchist Leon Czolgosz (pseudonym Fred Nieman), had attended the president’s speech but lacking opportunity to kill him there, arrived early enough the next day to ensure that he would be in line to meet the president. Czolgosz hid his gun in a handkerchief that he then wrapped around his hand. When the assassin finally reached the president, he fired twice, point blank, hitting McKinley in the chest and abdomen. 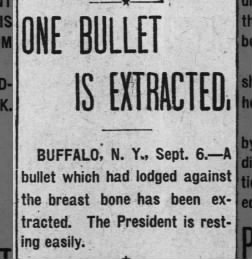 McKinley was rushed to the exposition’s hospital. The wound to his chest was superficial, but the one to his stomach was serious, and during the surgery the doctors were unsuccessful at locating the bullet. Still, despite mistaken news reports of his death, in the days following the shooting McKinley appeared to be recovering—until the night of the 12th, when he took a sudden turn for the worse. Gangrene had developed around his stomach wound, and at 2:15 a.m. on the 14th, President McKinley died. Vice President Theodore Roosevelt, who had rushed back from a family vacation, was sworn in as president later that afternoon. 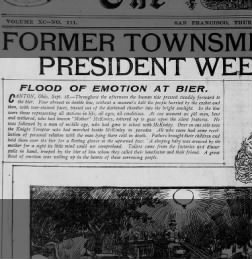 The nation was devastated by McKinley’s death. Vast crowds showed up to view his body in Buffalo, Washington DC, and Canton (Ohio) during the various public viewings, processions, and funeral services, and towns across the nation held their own memorial services. Czolgosz, who had been arrested at the scene of the crime, was quickly tried and convicted. He was sent to the electric chair on October 29, less than two months after the shooting.

Learn more about McKinley’s assassination, or other events and people that interest you, on Newspapers.com.