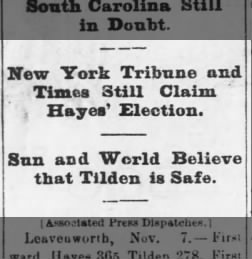 On March 5, 1877, Rutherford B. Hayes had his public swearing-in ceremony to become the 19th president of the United States, following one of the closest and most contested elections in American history.

A former lawyer and Union Civil War general, Hayes had served in Congress and won three terms as governor of Ohio. With a reputation for honesty and reform, Hayes was chosen as the Republican presidential candidate in 1876 and ran against Democratic New York governor Samuel J. Tilden.

In the presidential election that year, Tilden won the popular vote by more than 200,000, and it initially appeared that he would win the electoral vote as well. However, in three Southern states—South Carolina, Florida, and Louisiana—that hadn’t yet submitted their results, Hayes’ supporters convinced the states’ Republican-controlled election boards to review the votes. This, combined with a controversy regarding one of Oregon’s electors, left 20 electoral votes up for grabs. If Hayes could win all 20 votes, he would win the election; Tilden only needed to win 1. 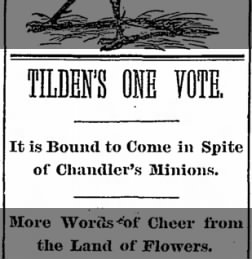 Upon review, the election boards in the three Southern states invalidated thousands of votes from districts where fraud and intimidation of black voters had been rampant, shifting the electoral votes in favor of Hayes. But when the Electoral College cast their votes in December, both Republican and Democrat electors for the three Southern states and Oregon claimed to be legitimate and submitted conflicting tallies.

To resolve which electoral votes were legitimate, Congress created a 15-member commission evenly split between Republican and Democrat Congressmen and Supreme Court justices, with one independent justice meant to provide the deciding vote. However, the independent justice resigned his place on the commission after winning a Senate seat, and a Republican justice was chosen to take his place. 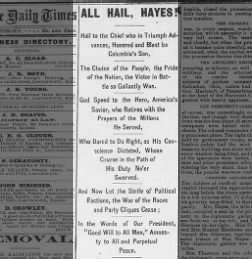 The commission met in February 1877 and ended up giving all 20 electoral votes to Hayes, which was enough for him to beat Tilden by one vote. The Democrats, however, decided to filibuster the confirmation of the votes. Finally, following alleged secret informal meetings in late February between influential Republicans and Democrats (later known as the Compromise of 1877), the Democrats conceded in return for various promises, including the withdrawal of federal troops from Southern states (signaling the end of the Reconstruction Era).

Hayes was officially named the winner on March 2. Inaugurations were typically held on March 4, but since it fell on a Sunday, Hayes was sworn-in during a private ceremony on the 3rd and then again in a public ceremony on the 5th. Although he was considered personally honest, Hayes’ single-term presidency was tainted by his controversial election.

Not surprisingly, the 1876 election was big news at the time. Find thousands of articles about it on Newspapers.com.