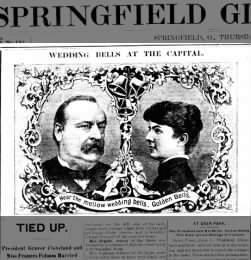 On June 2, 1886, President Grover Cleveland married Frances Folsom in a small ceremony at the White House, making him the only president to marry in the executive mansion.

Cleveland, who was 27 years Frances’ senior, had been friends with her father prior to her father’s death and had helped young Frances and her mother after the death. Cleveland’s feelings for Frances (whom he called “Frank“) deepened as she matured, and after she had graduated college and he was in the White House, he proposed marriage. The engagement was kept secret, and Frances and her mother left on an extended trip to Europe not long after she became engaged.

Frances returned to the United States shortly before the wedding. The guest list was kept small—only around 30 people or so. The ceremony took place at 7 p.m. in the White House’s Blue Room, which had been filled with flowers. The bride wore an ivory satin dress with a 15-foot train, and the wedding march was played by the US Marine Band. After the ceremony, the Clevelands mingled with their guests before hosting a small wedding dinner. The couple then honeymooned in Deer Park, Maryland; however, word got out and the press surrounded them there—which aggravated President Cleveland, who was no friend of the press. 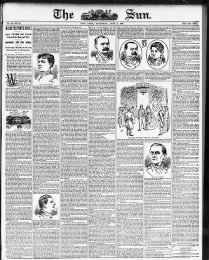 The newspapers—and the rest of the American public—became totally enamored of the new Mrs. Cleveland, who was young (21, compared to Cleveland’s 49), beautiful, well-educated, and charming. Her celebrity made her a common topic in newspapers, and her image was used (without her permission) on multitudes of products and advertisements. She set styles for women and had a multitude of babies named after her. Per her husband’s expectations, Frances kept out of politics and instead focused on issues such as women’s education and the kindergarten movement.

Frances and Cleveland were happily married for 22 years, until his death in 1908, and had five children together. Their second daughter, Esther, was the first baby born in the White House to a president, while their eldest child, Ruth, purportedly inspired the name of the Baby Ruth candy bar. Frances remarried in 1913 to a university professor and passed away in 1947.

Interested in learning more about President Cleveland’s marriage or about Frances Folsom Cleveland? Start a search on Newspapers.com!

11 thoughts on “President Cleveland Marries in the White House: June 2, 1886”