Nothing makes a hoax come together like a willing group of friends and a talented makeup crew. At least, such was the case with the Dreadnought Hoax, pulled off by six young people on February 10, 1910.

It all began when one of the pranksters, Horace Cole, decided it would be funny to pull a joke on one of the naval officers of the H.M.S. Dreadnought. The victim of the prank also happened to be the cousin of Cole’s friend Adrian Stephen, who would join the hoax along with his sister, Virginia Stephen. Virginia, of course, is now better known by her married name, Virginia Woolf. 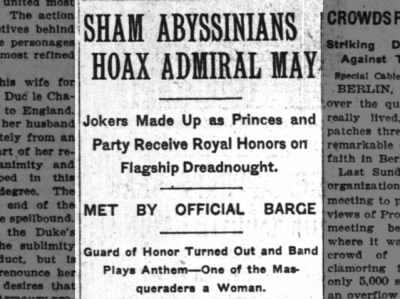 Virginia was still an unknown aspiring author at the time of the prank. She, Adrian, and three others in her literary circle dressed up like an Abyssinian entourage with the help of brown makeup and fake beards, while Cole put on a show as their interpreter. The group sent a telegram to the Dreadnought notifying the commander that the Emperor of Abyssinia would be paying a visit for the purpose of inspecting the ship. 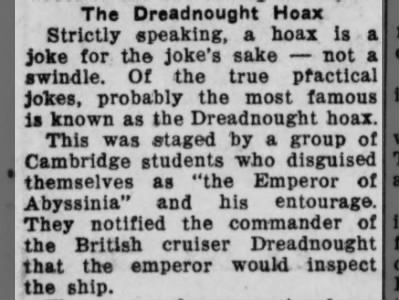 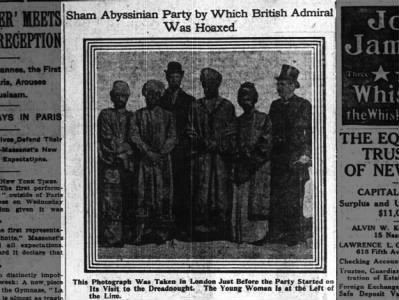 They were able to pull off the charade magnificently. The commander gave them a lengthy tour of the ship and invited them to tea, which the group respectfully declined, fearing that their makeup would be ruined. They left the ship with none the wiser and thought that was the end of it. But Horace Cole could not contain himself, and soon the details of the prank were circulating in newspapers around the world. 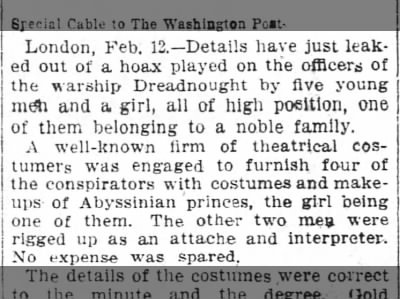 Though the commander reportedly took the joke with good humor, some of the officers did not. As revenge on the pranksters, two were reportedly “thrashed” with canes, which was the newspapers’ sensationalized way of saying that they were tapped lightly on the backside so that it could be said they were punished. Virginia Stephen was not made to receive the same punishment.

For more on the Dreadnought Hoax, try this search on Newspapers.com.