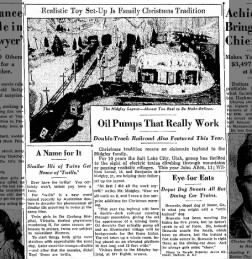 Whether it’s going Christmas caroling around your neighborhood or eating Chanukah latkes with sour cream and applesauce, every family has its own holiday traditions. Some are common, some are unique, but all are important to the people they belong to. If you’re interested in finding out about holiday traditions across the nation, a search on Newspapers.com brings back tens of thousands of results, all of them providing a glimpse into how other people celebrate the holidays we hold dear.

Food, of course, is the basis of many of our holiday traditions. A 1998 article in the Ukiah Daily Journal described one family’s Christmas Eve tradition of eating raw beef sandwiches, made of “raw ground round on pumpernickel rye bread, topped with Bermuda onion.” In 1978, the San Bernardino Country Sun published an article about a Californian family who makes a traditional Swedish Christmas Eve meal, complete with three courses of dishes like limpa bread, pickled herring, cod with white sauce, and lingon berries. A 1982 story in the Wisconsin Jewish Chronicle shared how one family would eat a special Chanukah meal of “honey and sponge cakes, pancakes from home-grown potatoes, and lamb,” which they shared with people who couldn’t afford their own meal. 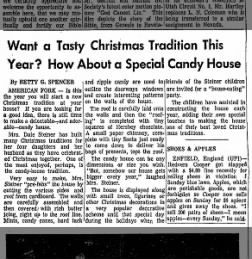 Other holiday traditions revolve around decorating the house. A 1936 issue of the Montana Butte Standard carried a story about a family who, every Christmas, set up an elaborate model train set that took up the entire room. Another family always hid a pickle ornament in the Christmas tree, reported a 2000 article in the Alexandria Times-Tribune. Whoever found the ornament got an extra present.

Then there are the traditions that revolve around activities. In the New York of days long past, visiting friends and family on New Year’s Day used to be so common that traffic would block the streets, recalled one man in a 1908 New York Times article. As told in a 1978 issue of the San Bernardino County Sun, during Chanukah it was tradition in one family for the father to light the shammash (the candle used to light the candles of the menorah), and then the children would light the others. And the Helena Independent Record reported in 1948 that in Nashville, Tennessee, it was tradition to sing Christmas carols at every house that had a candle in the window.

What are your favorite holiday traditions? If you’re looking to start a new tradition this year, try searching Newspapers.com for ideas.