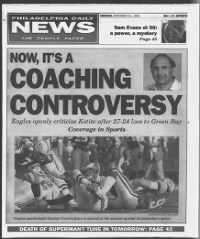 If you or your family lived in Philadelphia, take a walk down memory lane by searching or browsing the Philadelphia Daily News.

The Philadelphia Daily News was founded in 1925 with the money of William Scott Vare, a candidate in the 1926 U.S. Senate race. When it became evident that none of the existing Philadelphia papers would endorse him, Vare started his own.

From its beginning, the Daily News was an urban-focused, picture-based paper, covering hot news items like celebrities, crime, politics, and sports. Although known for its passionate, gritty reporting and its memorable, sometimes controversial front pages, the tabloid-sized Daily News also boasts three Pulitzer Prizes (1985, 1992, and 2010), among other awards.

In 1957, the Daily News was bought by the publisher of the Philadelphia Inquirer, and the two remained sister papers for years, despite several changes in ownership, until, within the last decade, the Daily News became an edition of the Inquirer. In 2011, the Daily News introduced a Sunday issue. 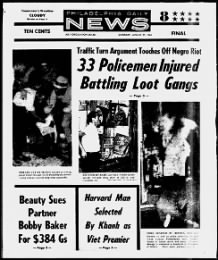 Explore the last 50 years of Philadelphia history in the Daily News, from the big headlines (like the 1964 race riot, 1980 slaying of mob boss Angelo Bruno, and 2015 visit to the city by Pope Francis) to the smaller news items (like when two babysitters led three kids to safety during a 1970 fire, or when someone was reported to be hanging out of a 25th-floor window in 1965).

And since the Daily News includes plenty of photos, you never know who you might find a photo of, whether it’s the five children of the Crooch family in 1965, three generations of women who volunteered at a local hospital in 1970, or your own family members.

With a Publisher Extra subscription you can access Newspapers.com’s collection of the Daily News, which currently includes issues from 1960 to 2016. Get started searching or browsing the Philadelphia Daily News here.