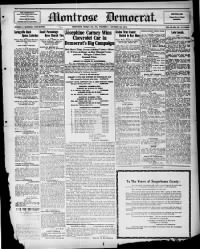 With over 10 million pages currently spanning more than 190 papers and 80+ cities, our Pennsylvania collection is Newspapers.com‘s largest—and it’s still growing!

Our newest Pennsylvania titles include Danville’s Morning News, the Montrose Democrat, Uniontown’s Evening Genius, Shippennsburg’s News-Chronicle, the Warren Mail, and a variety of papers from the city of Wilkes-Barre. Plus, more than 40 of our existing titles have been updated recently. If you have ancestors from these areas, try searching for them in these new and updated titles!

Did you know that some of the oldest papers on Newspapers.com can be found in the Pennsylvania collection? For instance, five of our Pennsylvania papers date back to the 18th century, including two that pre-date the Revolutionary War: the Pennsylvania Gazette (with issues back to 1728), Pennsylvania Packet (1771), Freeman’s Journal or North-American Intelligencer (1781), Independent Gazetteer (1782), and Die Unpartheyische York Gazette (1796).

An interesting tidbit about the previously mentioned Die Unpartheyische York Gazette is that it’s a German-language paper. Other papers in the Pennsylvania collection likewise reflect the state’s immigrant heritage, like the Middleburgh Post, which in 1888 began running a popular weekly satirical column written in the Pennsylvania German dialect. Similarly, Philadelphia’s Evening Public Ledger included an Italian-language column to draw in readers from the city’s large Italian population. 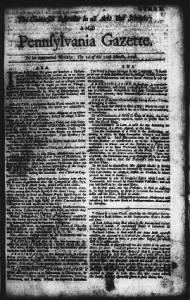 If you’re interested in the Civil War, the Clearfield Republican is definitely worth a read. Though Pennsylvania was a Union state, the Clearfield Republican (a Copperhead Democrat paper) was vehemently anti-Lincoln, anti-war, and anti-draft, so its editorials give an unusual perspective into the time period. Since the paper published lists of Civil War draftees from Clearfield Country, this paper can also be a good place to look for your male ancestors from the area.

Another interesting paper is the Petroleum Centre Daily Record. Like its name suggests, the short-lived town of Petroleum Centre lived and breathed one industry—oil. Thus the Daily Record revolved around oil too, from its ads to its market reports to its editorials. Even its accounts of the goings-on in the lives of the inhabitants often involved the oil industry. However, because Petroleum Centre and the Daily Record were tied so closely to oil, a drop in oil prices in the early 1870s spelled the end of both the town and its paper.

So if you have Pennsylvania ancestors, or are just interested in Pennsylvania history, try searching or browsing Newspapers.com‘s Pennsylvania collection. You never know what—or who—you might find!