This month we’re highlighting our growing collection of papers from Oregon. Although this state’s collection is already at over 500,000 pages across 24 newspapers, Newspapers.com is planning on adding thousands more pages in the near future through our partnership with the University of Oregon.

The newspapers in our Oregon collection showcase a wide range of interests, politics, and priorities—from reports on hometown and state news, to promotion of local industries, to advocacy of women’s rights, to support of political parties, whether Whig, Independent, Democrat, or Republican.

The two oldest newspapers in the state—the Oregonian and the Oregon Statesman—can both be found on Newspapers.com. Both dating back to the 1850s, these papers give you the chance to see what life was like in Oregon before it gained statehood. For example, this editorial from an 1856 issue of the Statesman discusses the difficulties of receiving mail by coach during the rainy season.

One particularly unique title is the New Northwest. This paper was founded by suffragist Abigail Scott Duniway to promote the rights of women, hoping to address economic, social, and political injustices while also covering topics of everyday interest to women readers. In one issue of the paper from 1871, a critique of the harsh lifestyle of farmers’ wives lies side by side with a rousing pro-temperance piece, an update on the activities of Susan B. Anthony and Elizabeth Cady Stanton, and a poem about the beauties of Oregon penned by a female contributor. 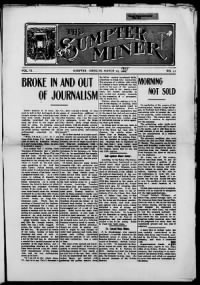 Another interesting niche paper is the Sumpter Miner. Though this paper contains some local news, it largely focuses on mining, the industry that caused the town of Sumpter to boom (and eventually bust). Case in point, in the very first issue of the paper (dated 13 September 1899), three of the four articles on the front page mention mining in some way or another.

Right now, Newspapers.com has papers from 14 Oregon cities: Ashland, Astoria, Burns, Enterprise, Grants Pass, Joseph, Klamath Falls, Medford, Ontario, Portland, Salem, St. Helens, Sumpter, and Toledo. So if you have ancestors that hail from those cities or the surrounding areas, you just might find information about them in the newspapers, like this tidbit from the Burns Times-Herald about what happened to Mr. E.W. Lewis, a local horse breaker, when he tried to go on vacation.

Get started browsing Oregon papers here. Or use our Search box for more specific queries.