In 1918, the most severe pandemic in recent history spread across the globe. The Spanish flu, or the H1N1 virus, infected 500 million people (about a third of the world’s population). Before it was over, about 40 million people died worldwide! 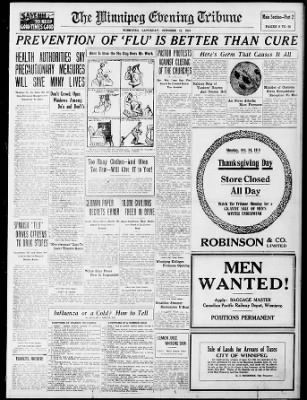 The Spanish flu arrived in three waves. It initially appeared in the spring of 1918. The first wave was mild. Symptoms included chills, fever and fatigue, but those infected recovered relatively quickly. By fall, however, the virus took a dramatic turn. The second wave was deadly, especially for people ages 20 to 40. In addition to the sudden onset of earlier flu symptoms, many developed a virulent strain of pneumonia. Their lungs filled with fluid and many victims died within hours or days after coming down with symptoms. The third wave hit that winter, and by the spring of 1919 the virus had run its course.

Though the origin of the virus is not known, it arrived during WWI, when troop movements and the living conditions in military camps helped it to spread. Governments were slow to report on the flu’s severity, for fear it could be seen as a military weakness. But when the flu arrived in neutral Spain, newspapers reported widely on it. As a result, the virus became known as the Spanish flu. It even infected the King of Spain. When it was over, the Spanish flu killed more than the war did. In fact, of the US soldiers who died in Europe, half of them died from flu and not the enemy.

Back on the home front, in an effort to contain the wildfire-like spread of the flu, gatherings of all types were cancelled, weddings and meetings postponed, and churches shuttered. Schools closed, prompting The Nebraska State Journal to offer students cash prizes for the best written entries on how they were spending their school break.

The human toll of the pandemic was astonishing. Children everywhere were left orphaned when parents succumbed to the virus. Families buried their loved ones one by one. Hospitals were overcrowded and undertakers and coffin makers were unable to keep up with demand. Homes of the sick were quarantined and family members often too sick to care for one another. Officials discouraged gatherings of any type, including funerals. Only close family members could attend the funerals of loved ones, and funerals were limited to 15 minutes!

The Spanish flu pandemic of 1918 affected everyone in some way. One-quarter of the country became infected and 675,000 Americans lost their lives to the virus. How did it impact your family tree? If you would like to learn more about this pandemic, search our archives today!

Search our archives today to find the obituary for your ancestor!