This month we’re excited to highlight a few of our papers by publisher Lee Enterprises. If you have roots in Wisconsin, North Dakota, or the quad cities of northwest Illinois and southeast Iowa, these newspaper archives are a valuable resource! 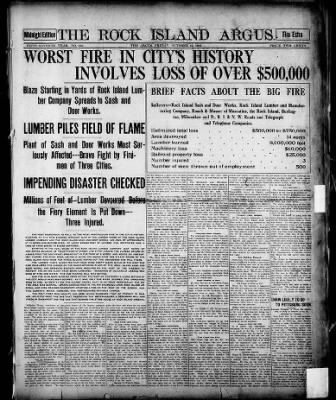 One story that shocked the nation happened in 1914. Noted architect and Wisconsin native Frank Lloyd Wright built his famous home Taliesin outside Madison in Spring Green. The home was the scene of a brutal mass murder when a deranged servant murdered Wright’s companion Mamah Borthwick, her two children, and four others at Taliesin by setting fire to the house and then killing the occupants with an ax as they tried to escape.

Bismarck Tribune: In the 1870s, railroads were given land grants to expand the rail system into the Dakota territory. In June 1873, the first train rolled into Bismarck carrying a hand-set press. Within a month, the first edition of the Bismarck Tribune was published. In this introduction in the first issue, the paper urged citizens to support it and help bring prosperity to the tiny settlement. The Bismarck Tribune is the oldest paper still published in North Dakota. It advocated for the relocation of the Territorial Capital from Yankton to Bismarck, and then lobbied aggressively for statehood. The paper recorded notable events like the fire of 1898 when flames raced through downtown buildings constructed of wood; or the floods in 1952 when snowmelt and ice backed up causing major damage in the city.

The Rock Island Argus and The Dispatch: The archives for these two papers (that later combined to form the Dispatch-Argus) are a great resource for anyone with roots along the Mississippi River in the quad cities of Rock Island, Moline, and East Moline, Illinois; and Davenport and Bettendorf, Iowa. The Rock Island Argus gets its name from the largest island in the Mississippi River (now known as Arsenal Island) and is one of Illinois’ oldest papers. We have issues that date back to 1855, about the time the railroad expanded to the island. This clipping from 1859, urges residents to play an active role in bringing industry to town. The island housed a fort, and later an arsenal, and was a hub of activity during the World Wars. Clippings like this one from 1863 listing citizens who have a letter to claim at the Post Office are a great way to research ancestors who lived on Rock Island.

A few miles from Rock Island lies Moline, Illinois – home to The Dispatch with papers dating back to 1894. The paper recorded the dramatic fire that ignited in the psychiatric ward of Mercy Hospital, known as St. Elizabeth’s, in 1950. Frantic patients trapped behind windows locked shut by rusty bars fought to escape. Before it was over, 41 lost their lives.

To see these newspapers and other titles, search our archives at Newspapers.com!