Do you have ancestors from the Tidewater region of Virginia, or are you interested in the area’s history? Check out the Newport News Daily Press on Newspapers.com, with issues dating back to 1898*! 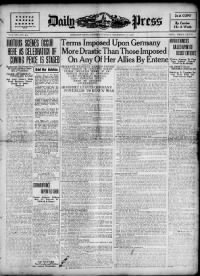 When the Daily Press began publication in 1896, Newport News was in the middle of making the transition from rural town to urban city. Fifteen years earlier, a railway had been built to allow coal to be shipped from the town’s port, and a few years after that, an influential dry dock and shipyard had opened on the waterfront—both of which led to an economic boom for Newport News.

The Newport News Daily Press started out as a four-page paper, sold for a penny a copy. The owner and first editor was Charles E. Thacker, who ran the paper for about 14 years. The Daily Press eventually became the primary daily morning paper of the Virginia Peninsula. In 1913, the new owners of the Daily Press also bought the Times-Herald (the area’s main afternoon paper), and the two papers were jointly owned but separately operated for many years (until 1991, when the Times-Herald ceased publication).

In 1930, the two papers were bought by William E. Rouse, and they stayed in the family for more than 55 years. From 1958 to 1973, the Daily Press was published in a 9-column format, making it the widest in the state. In 1986, the papers were finally sold to the Tribune Company (now Tronc, Inc., which continues to own the Daily Press). The Daily Press is today the main paper of the lower and middle peninsulas in Virginia.

If you’re looking for your ancestors in the Daily Press, a good place to look—as in many papers—is the society and personal columns. Over the years, as the Newport News got bigger and the paper got longer, so did the society column, which eventually evolved into a society section multiple pages long. Society news is wonderful for finding anecdotal information about your ancestors, such as whose card party they attended, where they traveled, whose funeral they attended, when they got sick or went to the hospital, where they went to school, and so on.

If you love old comics, the Daily Press is a great place to find them, as it expanded its Sunday comics section to 16 pages starting in February 1935.

Get started searching or browsing the Newport News Daily Press on Newspapers.com!

* With a Newspapers.com Basic subscription, you can view issues of the “Daily Press” from 1898 to 1922; or, with a Publisher Extra subscription, access those early years as well as issues between 1923 and 2017.