Do you have ancestors from New Jersey or Kentucky? This month we’re excited to announce additions to our archives from these states!

The Coast Star is a weekly paper from the beachside community of Manasquan, New Jersey. Our archives date back to 1899 when the paper was known as The Coast Democrat. The population of Manasquan was just 1,500 back then – small enough that when a local mother wanted to visit a neighbor while her baby napped, she simply called the operator and left the line open so the operator could notify her if the baby cried. 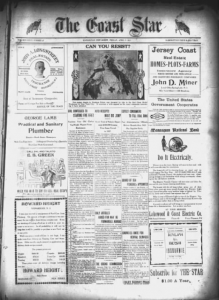 After the turn of the century, beach cottages, many belonging to residents of nearby New York City, began springing up along the New Jersey coast. In 1930, plans were made to dredge the Manasquan inlet and open the waterway for boat traffic. Residents soon found that bootleggers were using the waterway to transport booze (it was the middle of prohibition) and stepped up patrols.

The Ocean Star is published weekly in Point Pleasant, New Jersey, just a couple of miles away from Manasquan and serves the northern Ocean County area. It launched in 1998 and among other news, chronicled heavy damage along the New Jersey coast from Hurricane Sandy in 2012.

The Franklin Favorite hails from Franklin, Kentucky. Our archives date back to 1887 and are a valuable resource for research in Franklin and surrounding communities like Russellville, Richland, Price’s Mill, and Stevenson; and Northern Tennessee towns like Springfield and Orlinda. 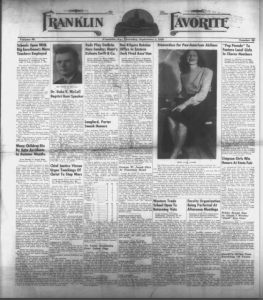 The paper reported on local landmark Octagon Hall. The octagon-shaped home was built in 1859 by Andrew Jackson Caldwell and served as a refuge for Confederate soldiers during the Civil War. Caldwell’s son remembered Confederate soldiers camping in the yard. He also recalled the time a weary soldier needed a place to sleep for the night. The family took him in and soon discovered the soldier was Caldwell’s long, lost nephew!

Like other Kentucky communities, Owensboro’s history is closely tied to the area’s distilleries, and Owensboro has recently been named part of the Kentucky Bourbon Trail. The Messenger-Inquirer also covers surrounding communities like Pleasant Ridge, Cleopatra, and Nuckols. The Neighborhood News column is a great place to search for relatives from nearby towns.