New Papers From Kentucky and Pennsylvania!

Do you have ancestors from Kentucky or Pennsylvania? We’re thrilled to announce our newspaper archives from these states are expanding!

The Paducah Sun: Paducah, Kentucky is located just past the confluence of the Ohio and Tennessee Rivers and is home to The Paducah Sun. Our archives date back to 1896 and contain more than 1.5 million pages from The Sun and related titles including The Sunday Chat; the Paducah Weekly Sun; the News-Democrat; the Weekly News-Democrat; and the Paducah-Sun Democrat. 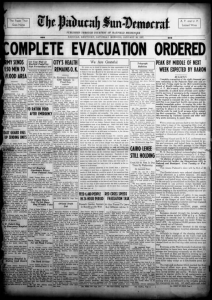 These papers covered important developments in the history of Paducah including steamboat commerce and railroad growth. One historic event that made Paducah headlines was the flood of 1937. Weeks of steady rain followed by sleet caused the Ohio River to crest at 60.8 feet. Flood waters consumed the city and some 27,000 citizens were evacuated. Many residents were trapped in their homes or stranded on the upper floors of downtown buildings. Following the disaster, the US Army Corps of Engineers constructed a 14-foot high floodwall. In the early 1990s, in an effort to beautify downtown Paducah, one citizen suggested painting murals along the floodwall. In 1996, the city hired an artist to paint more than 50 murals that depict the history of Paducah.

If you have ancestors from Paducah, society columns are a great place to piece together your family story. They often mention travels, and births and deaths. 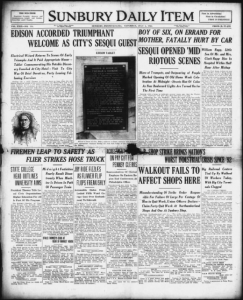 The Daily Item: Based in Sunbury, Pennsylvania, The Daily Item archives go back to 1894. Thomas Edison made a mark in Sunbury in 1883 when he installed and successfully tested the first three-wire electric lighting system in a local Sunbury hotel. The hotel’s name was later changed to the Edison Hotel in his honor. Electricity in Sunbury led to one of the first electric streetcar systems in the country. In 1906, the State of Pennsylvania established a bureau to record all the state’s births and deaths. Before then, newspapers like The Daily Item published birth announcements and obituaries.

Just 13 miles from Sunbury is the town of Danville. We have archives from the Danville Morning News and the Danville News that date back to 1898. In the 19th century, Danville became an important stop along the early transportation routes that included railroads, the Susquehanna River, and roads. Does your family tree contain an orphan from the Danville area? These newspapers are a great resource for information about institutions like the Mother House of Christian Charity and the Odd Fellows’ Orphans Home.

In 1919, during the early days of aviation, Danville residents poured into the streets to see an airplane. For many, it was their first time! The government plane circled the town dropping leaflets advertising Victory Liberty Loans (war bonds) to fund the war effort.

These stories are just a sampling of many fun and historical stories in these newspapers. Get started searching our Kentucky and Pennsylvania archives today at Newspapers.com!

17 thoughts on “New Papers From Kentucky and Pennsylvania!”