Newspapers.com has added issues* for three major papers: the Baltimore Sun, Orlando Sentinel, and Hartford Courant! Since these papers each come from a different region of the United States (Mid-Atlantic, Southeast, and New England), together they provide important coverage of the eastern half of the country.

Baltimore Sun
The largest paper in Maryland, the Baltimore Sun was founded in 1837. From the beginning, the paper operated under the philosophy of “news for all,” not just the moneyed classes, and focused on hard facts. By 1872, the paper had an official Washington bureau, and over the ensuing years added bureaus across the country and around the world. Interested in technological innovation, the Sun was an early adopter of technologies from the telegraph to the computer. Newspapers.com has issues from 1837–2016. 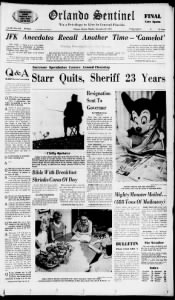 Orlando Sentinel
The Orlando Sentinel, a major paper in central Florida, traces its roots back to the Orange County Reporter, which began publishing in 1876 and is recognized as the first regular paper in Orlando. Today’s Sentinel is a product of various mergers between the Reporter, Orlando Evening Star, and South Florida (Orlando Morning) Sentinel. After various name changes, it became the Orlando Sentinel in 1982. Newspapers.com has issues from 1916–2016. 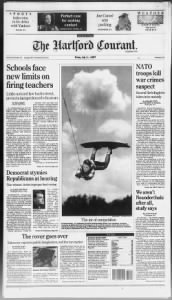 Hartford Courant
Founded in 1764, the Hartford Courant is one of the oldest continuously published papers in the United States and the biggest paper in Connecticut. The Courant began publishing before the United States was even its own country, and the paper had the widest circulation in colonial America. The Courant was seen as so important that when its paper mill was burned down during the Revolutionary War, the Connecticut legislature approved a lottery to pay for it to be rebuilt. Newspapers.com has issues from 1764–2016.

Explore these and other papers on Newspapers.com!

*With a Newspapers.com Basic subscription, you can see issues of these papers through 1922; or, with a Publisher Extra subscription, access those early years and additional issues from 1923 onward.