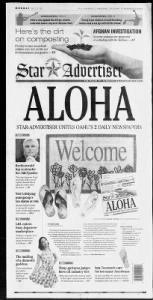 In 1962, the Advertiser and the Star-Bulletin entered into a joint operating agreement, in which the two papers would maintain separate, competitive newsrooms but share printing, circulation, administration, and advertising expenses. Finally, in 2010, the two papers were merged to create the Honolulu Star-Advertiser.

In their early years, the Honolulu Advertiser and the Honolulu Star-Bulletin both catered primarily to the white, English-speaking population of Honolulu. But by the mid-20th century, they had begun to make efforts to appeal to more diverse segments of Honolulu’s population as well. If you’re looking for ancestors or other family members in these papers, good places to start include personals columns, society pages, local interest columns, and the like.

And for an interesting piece of history, check out the Star-Bulletin’s report on the bombings at Pearl Harbor, which was the earliest coverage of the event in the world.

*With a Newspapers.com Basic subscription, you can view issues up to 1922; or, with a Publisher Extra subscription, access those early years as well as issues between 1923 and 2017