December 5th marked the passing of the dynamic revolutionary and politician Nelson Mandela. Earning a global spotlight by the 1950s, Mandela’s life has been recorded in newspaper articles that span half a century, covering events from his emergence into the political sphere to his death. These articles from years past highlight the long journey of his life—the ups and downs of a man’s persistent fight for equality.

The following article represents just one of the trials Mandela was involved in as a voice against South African apartheid: 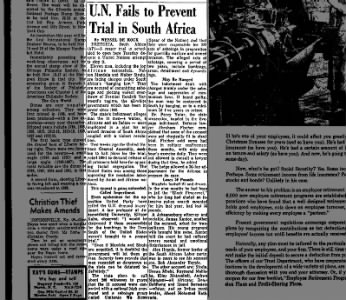 During his trial, Mandela gave the following well-known speech about his fight for a society of equals and the lengths to which he would go to achieve this: 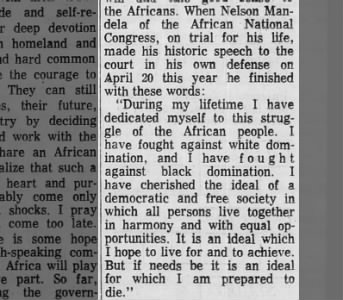 In 1964 Mandela was given a life sentence for acts of sabotage and plotting against the government.

For 27 years Mandela remained imprisoned, impressing the world with his determination and gumption. He refused to be freed while the rights of the black people in South Africa remained unchanged. In the late 1980s, changes began to happen, slowly breaking down the barriers between black and white South Africans. Then in 1990, South African president F.W. de Klerk released Mandela from prison. The two would go on to jointly receive the Nobel Peace Prize in 1993. 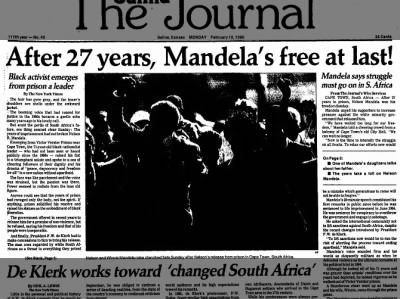 When the 1994 election came around, the black South African population was given the right to vote for the first time. In a continuation of the astonishing changes from apartheid government to a more equal country, Mandela was elected president of South Africa, the first black president the country had ever had. Newspapers across the United States and elsewhere hurried to spread the news. 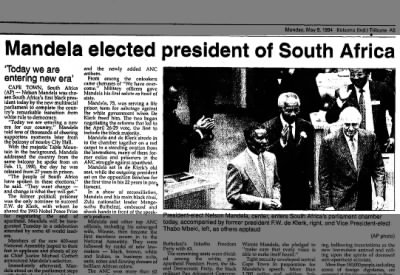 Mandela remained president until 1999, when he retired. He continued to be active in politics and world issues for another five years, criticizing some political choices and commending others and notably working with the Nelson Mandela Foundation, founded in 1999, in combating HIV/AIDS, the pandemic that afflicted and eventually led to the death of Mandela’s own son.

In 2004, Mandela stepped away from the public spotlight. He continued to meet with friends and family and occasionally stepped out for a public appearance but generally declined invitations to speak or be interviewed. In 2011, Mandela was hospitalized for a respiratory infection, which returned in 2013. It was after months of this prolonged infection that Mandela passed away, leaving behind an inspirational legacy and proof that one man can make a difference.

Click here for more newspaper articles about this notable man through the years.