The girl was found dead on the bedroom floor, lying in the blood that pooled from two bullet holes marring her body. 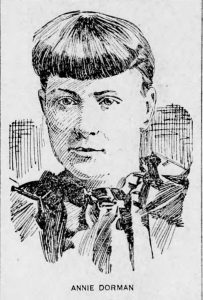 Her name was Annie Dorman, and she died September 1, 1897. Accounts of the investigation into her death filled up newspaper columns for weeks, not only in the Pennsylvania papers near where the event occurred, but also as far away as South Dakota.

Why so much coverage of the death of an obscure teenage girl in the rural outskirts of Philadelphia?

Perhaps because no one could conclusively prove whether her death was suicide or murder.

The Facts
The facts of the case (as told by nearby Philadelphia newspapers) were these:

The Investigation
As the investigation into Annie’s death progressed, more questions seemed to arise than were answered, leaving no one sure whether it was a homicide or suicide.

Supporting the claim of suicide was the fact that although Annie was generally described as happy, there were also accounts of her being “sensitive” and having “gloomy periods.” Annie had reportedly been having problems with her boyfriend, and she apparently hated her work situation with her half-brother’s family. Her sister-in-law had even reportedly choked her and chased her with a broom in the past. 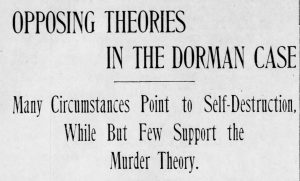 There were smaller details that seemed to point to suicide as well: Like the fact that the dogs hadn’t barked, implying no stranger had entered the home. Or that the room was in nearly perfect order, and that no blood had been tracked through the bedroom or house.

But those who believed it was murder also seemed to have ample evidence. The gun was old-fashioned and hard to cock, which made it seem unlikely that Annie could have used it to shoot herself multiple times. And after shooting herself in the jaw, would she have been able to shoot herself in the chest as well? Not to mention that if it were suicide, how were the other bullet holes in the ceiling and wall to be explained? And what about the fact that the Dormans had cleaned up Annie’s blood and burned her clothes before the evidence could be investigated?

The Conclusion
Ultimately, an inquest was held on October 5, more than a month after Annie’s death, but the results were not very satisfying. The jury gave an open verdict, ruling simply that Annie had died of wounds “inflicted by some person or persons unknown.”

Though murder had not been ruled out, the investigation into Annie’s death never went any further, due to a lack of funds, manpower, and evidence. If there was a murderer, he or she was never found.

Perhaps the closest we’ll ever get to an explanation of Annie’s death is this scenario proposed in an Philadelphia Inquirer editorial: 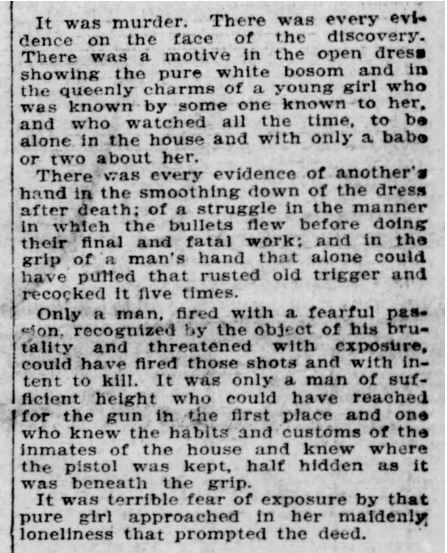 What do you think? Was it murder or suicide?

Read the newspaper accounts of Annie Dorman’s death on Newspapers.com. You can also view Annie’s memorial on Find A Grave.

One thought on “Murder or Suicide? The Mysterious Death of Annie Dorman”