Frances Glessner Lee was not your typical millionaire heiress. She lived the early part of her life doing what society thought a young woman from a wealthy family ought to do: she played with dolls, was educated in the lonely privacy of her own home, and eventually married a respectable lawyer instead of attending college (although it ended in divorce). Her rather unique interests in forensic pathology and crime scene investigation were discouraged by her family, and so she put them aside. But when her brother died in 1930, followed shortly by both of her parents in the years thereafter, 52-year-old Glessner Lee found herself with a lot of money and a newfound freedom that she’d never had before.

With the help of her brother’s old classmate, Dr. George Burgess Magrath, Glessner Lee established a department of legal science at Harvard University in order to train for better forensic investigation. Together they urged that coroners be replaced with medical professionals. Their efforts influenced states across the country to change the way they approached forensic science. 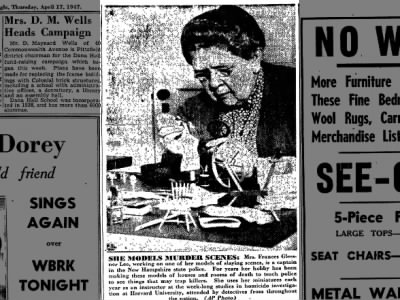 But the most unusual and morbidly delightful contribution that Glessner Lee provided were her “Nutshell Studies,” a series of miniature model crime scenes depicting incredibly detailed versions of real-life incidents. The lights turned on and off, doors opened and closed and locked with tiny keys, and tiny dolls represented the bodies of the deceased. Glessner Lee made every detail to the exact specifications of the life-sized crime scenes with mind-blowing accuracy, down to the last gruesome detail. 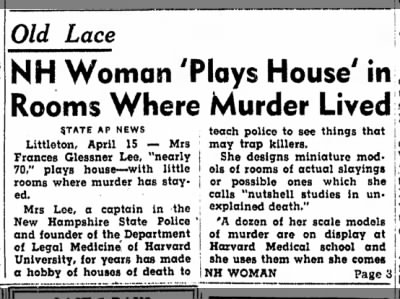 The Nutshells were used to train investigators to see the little things that can catch a killer. Was the death a murder, a suicide, or an accident? The scenes represented all of these options, and those observing the model rooms examined the evidence until they could figure it out, often with the aid of other information that would be provided at a real crime scene. 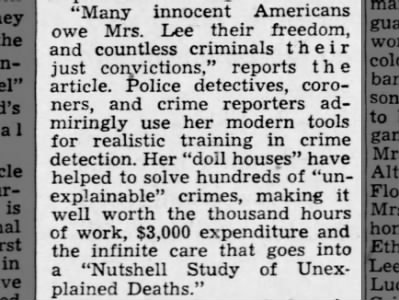 For all her work in furthering the field of forensic investigation, Glessner Lee was made an honorary Captain of New Hampshire’s police force, a rank no woman in the United States had been given before.

Glessner Lee’s Nutshell Studies are still used in training even today. Her contributions were directly responsible for many of the changes that have led to forensic investigation as we know it. And if she seems vaguely familiar, here’s a fun bit of trivia: she was also reportedly the inspiration for the character of Jessica Fletcher in the show Murder, She Wrote.

For more about Frances Glessner Lee, articles on her work can be found using this search.