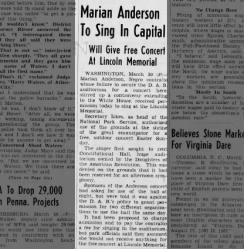 World-renowned African American contralto Marian Anderson performed to a crowd of more than 75,000 at an Easter Sunday concert at the Lincoln Memorial on 9 April 1939. Her performance was the climax of a months-long controversy over the concert’s venue that quickly became a national discussion of racial discrimination.

It all started when the Daughters of the American Revolution (DAR) rejected a request for the use of their Constitution Hall in Washington DC for Anderson’s performance. The DAR maintained that the rejection was due to a previous booking on that date, but many instead saw it as a result of racial prejudice. One of those was First Lady Eleanor Roosevelt, a member of the DAR at the time, who consequently resigned her membership and then wrote about her decision in her syndicated column “My Day.”

Roosevelt’s involvement in the issue launched it into the national spotlight, with newspapers across the country following the 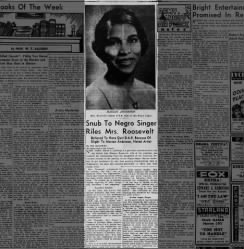 story’s developments and local opinion on the matter. So on 9 April, what was originally meant as a performance for a few thousand became a concert for an integrated audience of more than 75,000, with “untold millions” more listening in at home to the NBC radio broadcast. Anderson opened her free, open-air concert with “America” (“My Country, ‘Tis of Thee”), singing with what one news story described as “no bitterness and no cynicism, but only […] fervent sincerity.”

But newspaper coverage of the story didn’t end with the concert. In the days and weeks following, various editors and columnists weighed in on what the concert meant to the issue of racial discrimination in America. While some papers, like the Pittsburgh Courier, remarked that “absolutely nothing has been solved by her action,” others saw it as “a victory in the battle against racial intolerance.”

If you’re interested in finding out more about this story—or in finding your family in local papers—search Newspapers.com to read countless historical articles on Marian Anderson or other controversies of national and local interest.