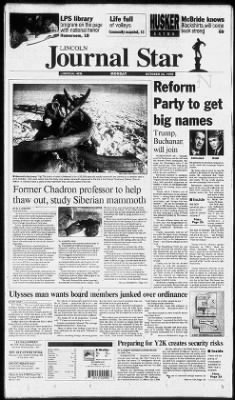 If you are interested in Nebraska history, the Lincoln Journal Star and its related papers are a treasure trove of information. For instance, you can find an essay by famous author Willa Cather in the Nebraska State Journal that was published in 1891, when she was just 17!

These Lincoln newspapers are also valuable resources for finding your Nebraska relatives. Since many of these papers, especially the earlier ones, overlap in years they published, you are even more likely to find the information you’re looking for. For example, if you were looking for information on an ancestor who lived in Lincoln in 1902, the Courier, Lincoln Evening News (included under the Lincoln Journal Star), Lincoln Star, and Nebraska State Journal were all publishing that year, increasing the likelihood of finding your ancestor.