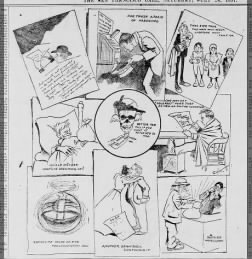 It didn’t take long after gold was discovered in the Yukon for word to spread to the surrounding areas. Prospectors from nearby parts of Alaska and Canada quickly snapped up the most promising claims. But due to a lack of contact with the outside world, word didn’t reach beyond the area until prospectors toting large amounts of gold got off ships in San Francisco and Seattle in mid-July 1897, nearly a year after it was first discovered.

As word of the discovery of gold spread like wildfire, people rushed to buy passage on ships heading north, and the gold rush understandably became a major story in the newspapers. But Klondike gold permeated more than just the headlines. It was the subject of editorial cartoons as well as advertisements, such as those selling supplies for the Yukon and those drumming up support for mining ventures. One paper even used the prospect of winning a small amount of real Klondike gold as an incentive to increase subscriptions and advertising.

In all, about 100,000 people started off toward the Yukon to find their fortunes. It was a long, difficult trip to get there, and Canadian authorities required each person to bring a year’s worth of food and supplies since resources were scarce that far north. 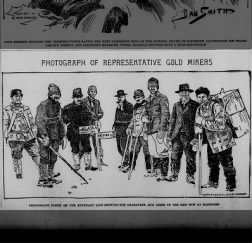 While some people traveled the entire way by ship, the majority traveled partway by ship and then came the rest of the way via various overland and river routes through Alaska and Canada, braving rough terrain and freezing weather. Unfortunately, when the main rush of newcomers arrived in Dawson City (the boomtown nearest the discovery) in late June and early July of 1898, they found that the best claims had already been taken, as it had been two years since the original discovery.

Do you have an ancestor who was part of the Klondike Gold Rush or just want to learn more about it? Start a search on Newspapers.com.