On November 4, 1922, the first stair to what would eventually be uncovered as Tutankhamen’s tomb was discovered in Egypt by the team of British archaeologist Howard Carter. King Tut’s tomb would quickly gain fame for being among the most intact pharaonic tombs, as well as for the curse that some said affected those who were involved in the tomb’s discovery. 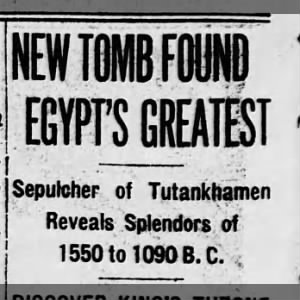 Howard Carter had been excavating in the Valley of the Kings under the patronage of Lord Carnarvon since 1917, but by 1922 he still had not made any finds of major significance. When Lord Carnarvon threatened to withdraw his funding, Carter convinced Carnarvon to bankroll a final excavation season. The request paid off, and on November 4, 1922, Carter’s team discovered the top of a staircase. Further digging revealed a door to what would turn out to be Tutankhamen’s tomb, and Carter sent word to Carnarvon, who joined him in Egypt.

The tomb was officially opened on November 29 (though Carter, Carnarvon, and others had secretly entered before that), and they discovered that though the tomb appeared to have been robbed twice in antiquity, the majority of the treasures and other items remained inside. With such a host of artifacts, work on the tomb was slow and painstaking. It took months after the tomb’s discovery for the burial chamber to be opened, and three years after the discovery for the archaeologists to finally view Tutankhamen’s mummy itself. In total, it would take eight years for all the objects in the tomb to be documented and removed.

As soon as word got out about the discovery in 1922, the world was fascinated with the wonders that were uncovered from the 3,000-year-old tomb. Despite the ancient grave robbing attempts, Tut’s tomb was still among the best-preserved pharaoh’s tombs ever discovered. However, another factor also increased King Tut’s fame: the so-called “curse of the pharaohs.”

Beginning with Lord Carnarvon’s illness and death in April 1923 (due to complications following an infected mosquito bite), rumors of the curse grabbed the public’s attention. From then on, the deaths of any of the people associated with the tomb’s discovery were attributed to a curse that was said to affect anyone who had disturbed Tutankhamen’s rest. In all, dozens of deaths were claimed to be the result of the curse—though Howard Carter himself would live for more than 15 years after the discovery.