If your understanding of the Korean War comes from watching the TV show M*A*S*H, you’re not alone. The Korean War has been referred to as the forgotten war. July 5th marks the 68th anniversary of the first American casualty of the war. With North Korea dominating headlines again, we’ve explored our archives to give you a brief overview of the Korean War from the headlines as it happened. 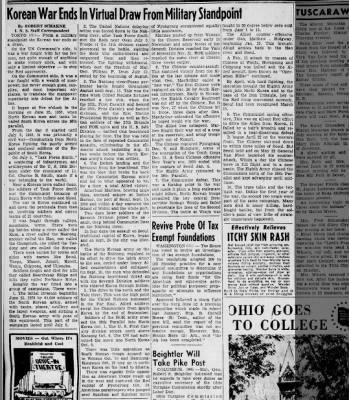 At the end of WWII, Korea was divided into zones. The Soviets occupied North Korea where communism reigned, and the US occupied South Korea. Both Koreas longed for unification —but each on their own terms. The communist leader of the North, Kim II Sung, attempted to unify the Koreas by force when on June 25, 1950, he ordered 75,000 soldiers to spill over the 38th parallel line into the South. Five days later, President Harry S. Truman ordered US troops into action as America sought to stop the spread of communism.

By August, North Korean troops had taken control of Seoul and much of the country. In September, under General Douglas MacArthur, the US launched a major counter-offensive and drove Northern troops back to the 38th parallel line and continued across it until troops nearly reached the Chinese border. The Chinese government fearing invasion sent 200,000 soldiers to bolster North Korea.

With the help of China, and support from the Soviets, North Korea pushed US troops back across the 38th parallel again. Fighting was intense. Among significant battles were the Battle of Inchon and the Battle of Chosin. US losses and a disagreement in strategy spurred President Truman to fire General MacArthur. General Matthew B. Ridgway took over command.

Nearly three years after the war started, it ended right where it started – at the 38th parallel line. The US lost 36,500 soldiers. There was no clear winner and no peace treaty established. An armistice was adopted designating a DMZ (Demilitarized Zone) that separated North from South. Nearly 70 years later, the Korean peninsula remains divided.

Kim II Sung remained the North’s leader until his death in 1994 when his son Kim Jong II took over. After Kim Jong II’s death in 2011, Kim Jong Un, the son of Kim Jong II and grandson of Kim Sung II was named Supreme Commander.

Do you have a relative that fought in the Korean War? Tell us about it! You can search our archives to find more articles about the war! You can also access Korean War casualty records on Fold3.com.

47 thoughts on “July 5th: First Casualty of the Korean War”