The Sting of Success 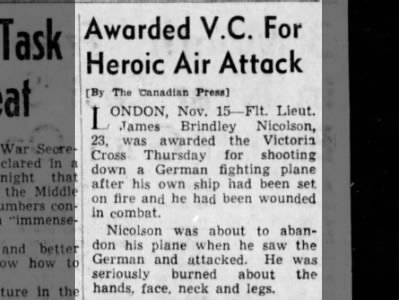 The story behind this clipping is much more impressive and unbelievable than the two short paragraphs let on. James Brindley Nicolson was a 23-year-old flight lieutenant in World War II when his plane was fired on, leaving him injured in the eye and leg. Blinded by the blood from his wounds and with a fire starting in the cockpit, Nicolson was about to bail out when he spotted another enemy fighter. Determined to see the battle out to the bitter end, Nicolson crawled back into the flaming bucket seat and fired at the enemy craft until it fell from the sky.

Nicolson managed to jump from his diving plane and open his parachute in time to land relatively safely on solid ground, although he was shot in the leg midair by a member of the Home Guard before they realized he was not the enemy. As the article states, Nicolson was badly burned on much of his body after literally sitting in fire during the airborne fight. Not surprisingly, Nicolson was awarded the United Kingdom’s highest honor for bravery and gallantry, the Victoria Cross.

Head over to Newspapers.com to find more clippings like this one.