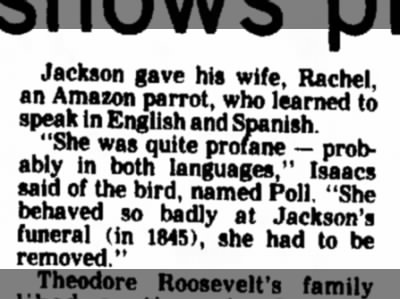 Here’s a comical tidbit about one of our presidents past. Seventh U.S. President Andrew Jackson once purchased an African Grey parrot for his wife. When she died, Jackson himself took over care of the bird, whose name was Poll. Jackson had a bit of a temper, and dear Poll the parrot must have picked up on some rather foul-mouthed language around the fiery man. When Jackson died many were invited to the funeral, Poll included—until the parrot launched on a loud and repetitive cursing binge, shocking the reverent crowd. The offensive bird was promptly removed from the house.

Check out Newspapers.com for more strange stories like these. Try looking for a topic that interests you on the search page.