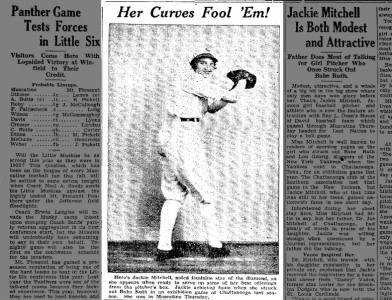 The story is surprising: 17-year-old amateur strikes out two of the best baseball players of all time? So goes the tale of Jackie Mitchell, one of the first girls to ever sign with a minor league baseball team. Many thought this was so unbelievable it had to be a hoax, but whether staged or sincere the story appears to be true.

Jackie grew up next door to eventual Dodger great Dazzy Vance, who taught her classic baseball tricks and throws. She thrived in the world of sports and played on both basketball and baseball teams depending on the time of year. Eventually she caught the eye of the chief scout of the Washington Senators and president of the Chattanooga Lookouts, Joe Engel. He gave her a coveted spot on his team in their exhibition game against the New York Yankees. 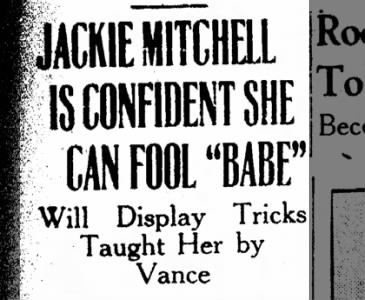 Mitchell sped to Tennessee—with her mother as chaperone, of course—and signed a contract with the Lookouts, making her an official member of the class AA minor league team. She practiced like crazy, trying to warm up her pitching arm after months of playing basketball.

Before the game Mitchell posed for pictures with some intimidating competition: Babe Ruth and Lou Gehrig. She was put on the pitcher’s mound early on, and to everyone’s surprise, struck out Babe Ruth with two wicked curve balls—Ruth’s well-known weakness—and one straight across the plate. Lou Gehrig followed Ruth, and soon he too was sent back to the dugout after three strikes. 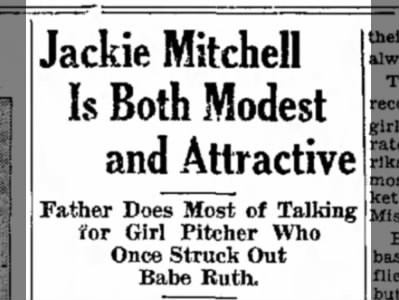 Mitchell’s success against two major baseball greats certainly happened that day in 1931, but there are some who suspect Ruth and Gehrig were in on it all along. Ruth is known to have been a fan of pranks, so this is not necessarily an unfair speculation, but Gehrig was generally very unwilling to do anything that would make him look bad, even for a joke. But whether you believe Mitchell pranked the masses, got by on luck, or was just a skilled player, this unusual baseball story is certainly one for the news.

Check out Newspapers.com for more articles like this. Whether your interests be sports-related or not, there are hundreds of papers to look through using the search or browse features.

One thought on “Jackie Mitchell”