It’s Death for Bonnie and Clyde

Fans of Timeless will recognize today’s topic as the subject of last week’s episode. The young, outlawed duo of Bonnie and Clyde were famous in their day for their criminal antics—robbing banks, stealing cars, and killing those who got in their way. The lawless lovers eventually met their end in a relentless hail of bullets, ambushed by the police they’d managed to evade for four years. 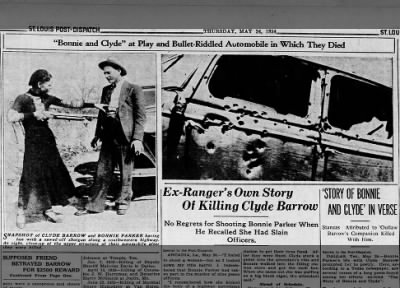 In reality, neither Bonnie or Clyde was quite as rough-and-tumble as the news reels made them out to be. Clyde was an aspiring musician whose shady friends drew him into a life of crime. Bonnie was a thoughtful poet who dreamed of being an actress. She hoped Clyde would change his ways and straighten out, but instead she dove with him into the life of an outlaw. They both hated killing and released people whenever possible, but Clyde did not hesitate to shoot when cornered.

The string of police deaths they left in their wake eventually turned the public against them. Alive or dead, the people wanted to see Bonnie and Clyde taken down. In the end it was one of their gang, Henry Methvin, who brought about their end, though it’s unclear whether he meant to. He told his father, Ivan Methvin, about a rendezvous with Bonnie and Clyde, and his father passed that information on to police. Ivan then pretended to have car trouble on the highway near the meeting spot. When Bonnie and Clyde stopped to help, officers pumped approximately 150 rounds into their vehicle. The young couple had no chance of survival. 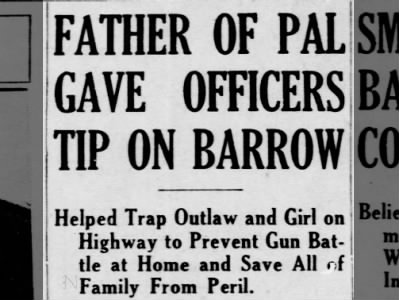 Neither Bonnie nor Clyde had any disillusions about the fate that eventually awaited them. They’d survived enough close calls to know that one day they’d get caught, and it wouldn’t be pretty. One of Bonnie’s poems, written not long before that fateful day on the highway, shows just how well she understood what would soon happen. The rhyme served as the couples epitaph. 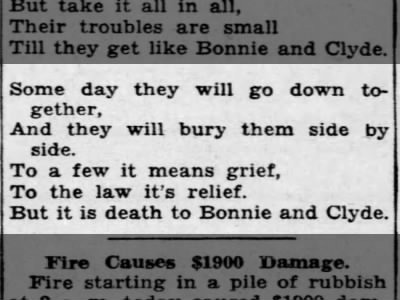 Sadly for Bonnie, their side by side burial was the one part of that stanza that wasn’t true. Bonnie and Clyde’s mothers both objected to the idea, and their graves remain in separate cemeteries in Dallas.

Bonnie and Clyde made many appearances in newspapers over the years. Find more of their history (true and exaggerated) with a search on Newspapers.com.