How NOT to Be Buried Alive 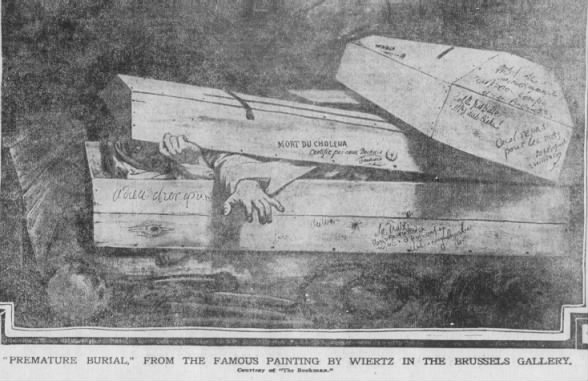 “Are you sure that your relative is actually dead, when the coffin is fastened, never to be opened”? –Louisville Daily Courier, 1868

What options did a person have over a century ago if they wanted to avoid being buried alive? A look through historical newspapers from both sides of the Atlantic gives us some answers!

One option for preventing “premature burial” (also called “premature interment”) was the safety coffin. Though designs differed, safety coffins typically included a signaling device that let people above ground know the person in the casket was still alive.

Numerous illustrations and articles about safety coffins appeared in newspapers of the time. One featured in the papers was designed by Russian count Michel de Karnice-Karnicki. According to the Stockton, California, Daily Record in 1901,

[The] apparatus consists of a tube four inches in diameter, a box, and a few appliances for signaling. The tube is placed over an aperture in the coffin, and the other end of it appears above the surface of the ground, where it is surmounted by the box. Through the tube passes a rod, on the end of which, inside the coffin, is a ball. The slightest movement of the body in the coffin is communicated to the rod, which in turn releases springs. The door of the hermetically sealed box flies open, the bell rings, and the signal ball rises above the grave to a height of six feet. 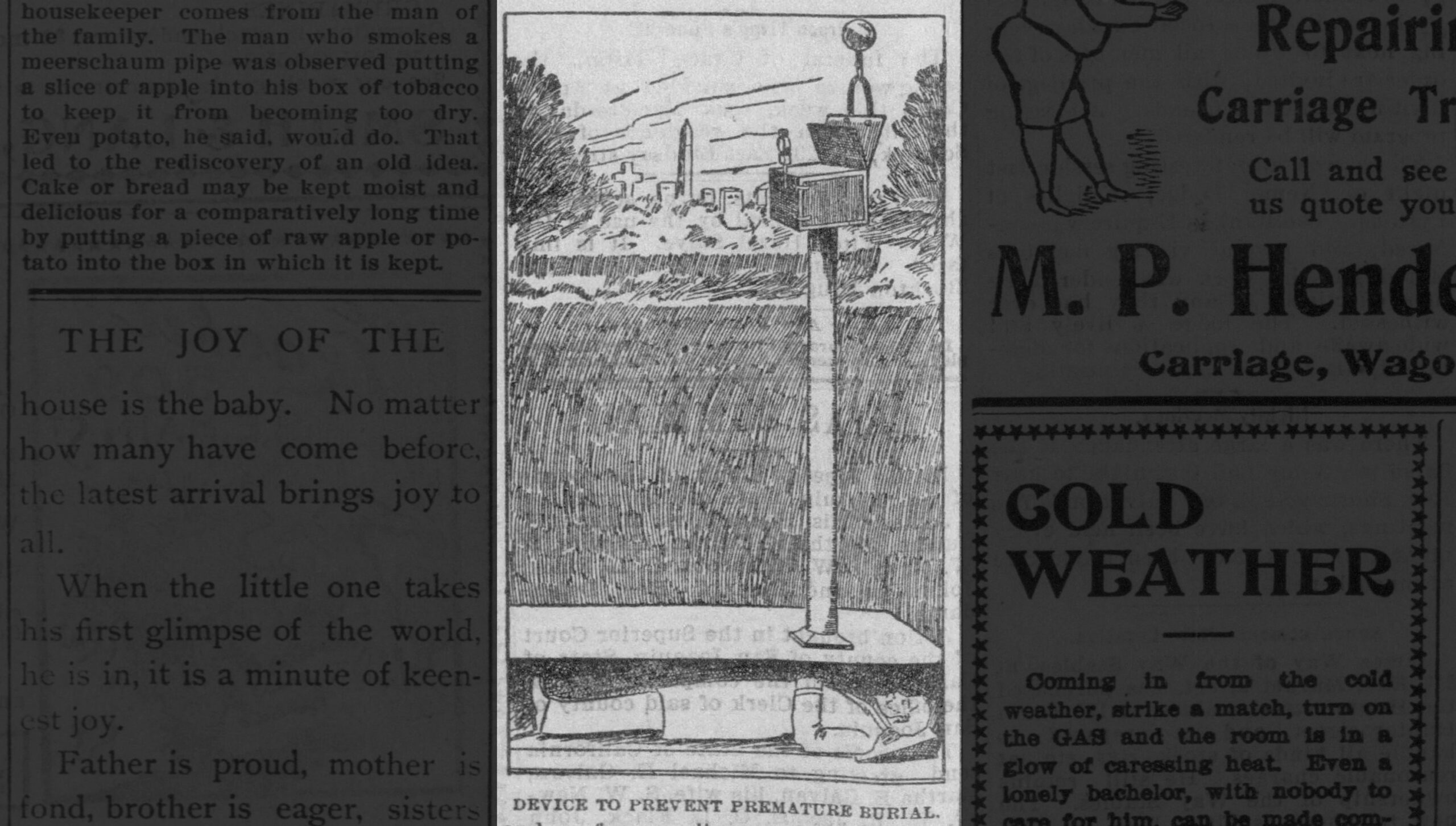 Other types of safety coffins were featured in newspapers as well, such as:

One safety coffin got quite a bit of newspaper attention in 1868 when its inventor, Franz Vester, gave a public demonstration in New Jersey about how it worked. In addition to the typical alarm system, newspapers noted that Vester’s coffin also included a “receptacle for refreshments.”

But not everyone who feared premature burial wanted (or could afford) a safety coffin, so other methods focused on ensuring that a person was truly dead before burial.

One option frequently discussed in newspapers was to build “waiting mortuaries,” which were reportedly used in Germany. The ideal waiting mortuary was a closely monitored, comfortable institution where bodies could be kept until they showed signs of decomposition—or signs of life.

Newspapers also documented other suggestions for verifying death, including:

Some people’s fear of being buried alive even led them to request specific procedures prior to burial, such as asking that their head be amputated, their heart pierced with a needle, or their jugular vein cut.

Just how often people were actually buried alive during the Victorian era is unknown. Even at the time, its prevalence was hotly debated in the European and American medical communities—and in the press.

Whether premature burials were common or not, the popularity of the topic reflects a real anxiety among some segments of the population at the time—an anxiety that certainly wasn’t diminished by the numerous “true” newspaper accounts of people being buried alive.

But in some cases, this concern led to action. Perhaps most noticeable were the associations that lobbied for regulation of death certificates and other aspects of the death verification process—hoping to prevent the “unspeakable cruelty” of premature burial.

7 thoughts on “How NOT to Be Buried Alive”