Horse of the Century

In June of 1973 a horse sprinted alone across the finish line of the Belmont stakes and became a Triple Crown champion. His name was Secretariat, and he was the first horse in 25 years to win the Kentucky Derby, the Preakness, and the Belmont Stakes. 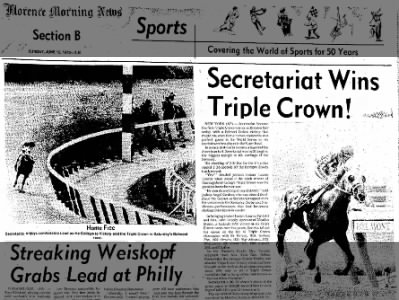 The Belmont Stakes victory was stunning: Secretariat pounded down the final stretch of the track a full 31 lengths ahead of the second-place contender, finishing the 1.5 mile race in just 2 minutes and 24 seconds. That record time still stands today, yet to be beaten. 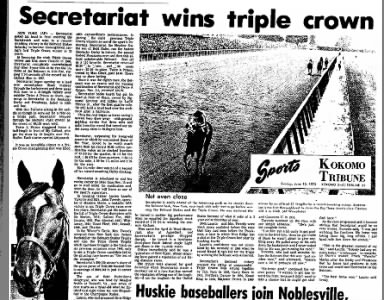 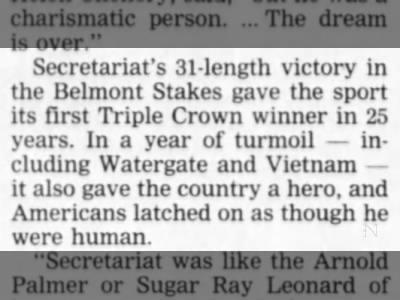 Secretariat’s story reads like a movie script. He always started at the back of the pack, speeding to first place in a burst of energy to win his races. But in the exciting weeks leading up to the first race of the Triple Crown, Secretariat placed a disappointing third in the 1 1/8 mile race at the Wood Memorial Stakes, leading critics to proclaim that he was just another horse with speed and no distance. Many lost faith that “Big Red,” as he was called, would find success in the longer races of the Triple Crown, making his subsequent victories all the more thrilling.

Secretariat was retired later that year and put to stud. At age 19 he was euthanized after suffering from chronic, painful inflammation, and buried in a silk-lined casket near his sire, Bold Ruler. 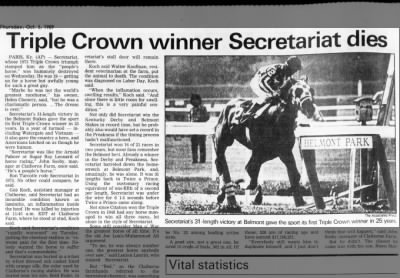 For more about Secretariat, take a look at the results of this search on Newspapers.com. You can find more articles about the Triple Crown win here.